Whisky Galore! has been raising laughs for nearly 70 years.

Compton Mackenzie’s popular 1947 novel inspired an unforgettable Ealing comedy in 1949 and now a brilliant new movie which shows off Scotland at its dazzling best.

Based on the true story of the sinking of the SS Politician off the coast of Eriskay in 1941 and the subsequent seizing of thousands of bottles of whisky by locals, Whisky Galore! is a celebration of a nation’s love of the water of life. 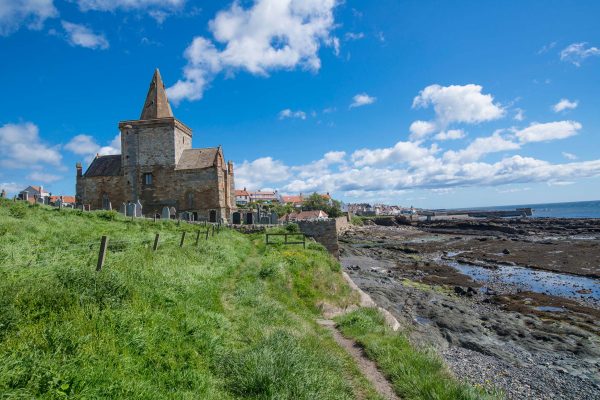 While Alexander Mackendrick’s original 1949 movie was shot almost entirely on location in the Outer Hebrides ,where Barra stood in for the fictional islands of Great Todday and Little Todday, director Gillies MacKinnon’s brand new film adaptation of the book makes use of a variety of outstanding locations throughout Scotland. From St Abb’s Head in the Scottish Borders, Portsoy in Aberdeenshire and Ardeer Beach in Ayrshire, to St Monans in Fife. All places featured can be viewed on the Whisky Galore! film locations map.

The new version of Whisky Galore! certainly has one notable advantage over the original, namely Scotland’s amazing landscapes are in glorious colour. 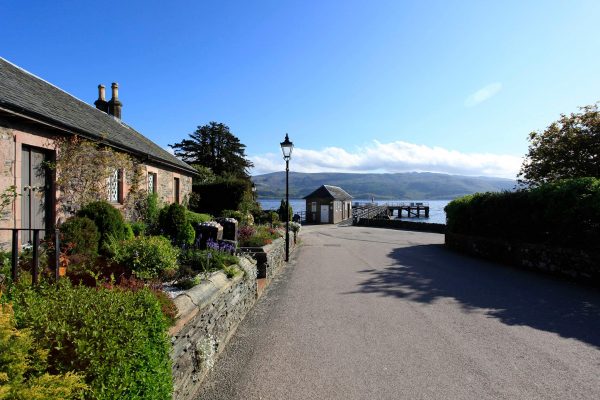 The Village Hall at Luss on the banks of Loch Lomond featured as the school classroom.

What the stars said 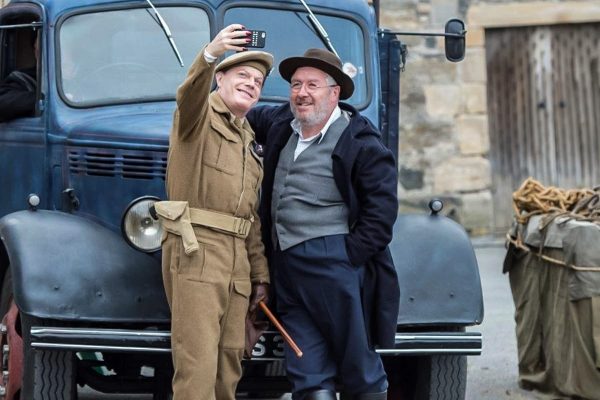 Eddie Izzard and Gregor Fisher on the set of Whisky Galore! © Arrow Films.

Before the release of Whisky Galore! in cinemas, we spoke to two of the stars, Eddie Izzard and Gregor Fisher about the new adaptation and filming in Scotland.

Gregor Fisher who plays Todday islander Macroon described working on Whisky Galore! as “one of the nicest, if not the nicest, job I’ve ever had”.

Recalling his time filming in Portsoy. “We were welcomed with open arms to the point that I expressed an interest in buying some lobster, four lobsters were delivered to my door the next day, free of charge. I couldn’t believe it. Half the community is in the film. It was a joy.”

The Spirit of Scotland

The harbour village of Portsoy, Aberdeenshire starred as the main village on the island of Todday.

After a fabulous time filming Whisky Galore! we asked the stars what was their favourite place in Scotland?

“I don’t have a favourite place in Scotland and I’ll tell you why,” said Fisher. “Nowadays, Scotland to me is not just the places because there are so many places that I like to visit, it’s to do with the people. It’s walking down the street in Glasgow and some guy you’ve never met in your life starts telling you something.”

“It’s the absolute warmth and kindness shown to you in Portsoy and all the rest of it, or it’s going to a place like Langholm in Dumfries & Galloway, where I’ve been going since I was a small boy and people saying ‘oh, you’re back again’. And it’s nothing to do with television or films and blah de blah, it’s ‘oh, it’s Gregor’. It’s a familiarity. It’s not the actual place, it’s the people.”

Stand-up comedian and marathon runner Izzard on the other hand has a soft spot for Scotland’s capital city. “When I first arrived in Edinburgh by train on a January night, I looked up and everything was lit up and I just thought ‘this is amazing’. I then did the Edinburgh Festival every year from 1981 to 1993.”

Whisky Galore! is distributed by Arrow Films. Watch the trailer now and see it in cinemas from 5 May.

Discover more about Scottish film and TV locations and plan a spot of set-jetting around Scotland for yourself.