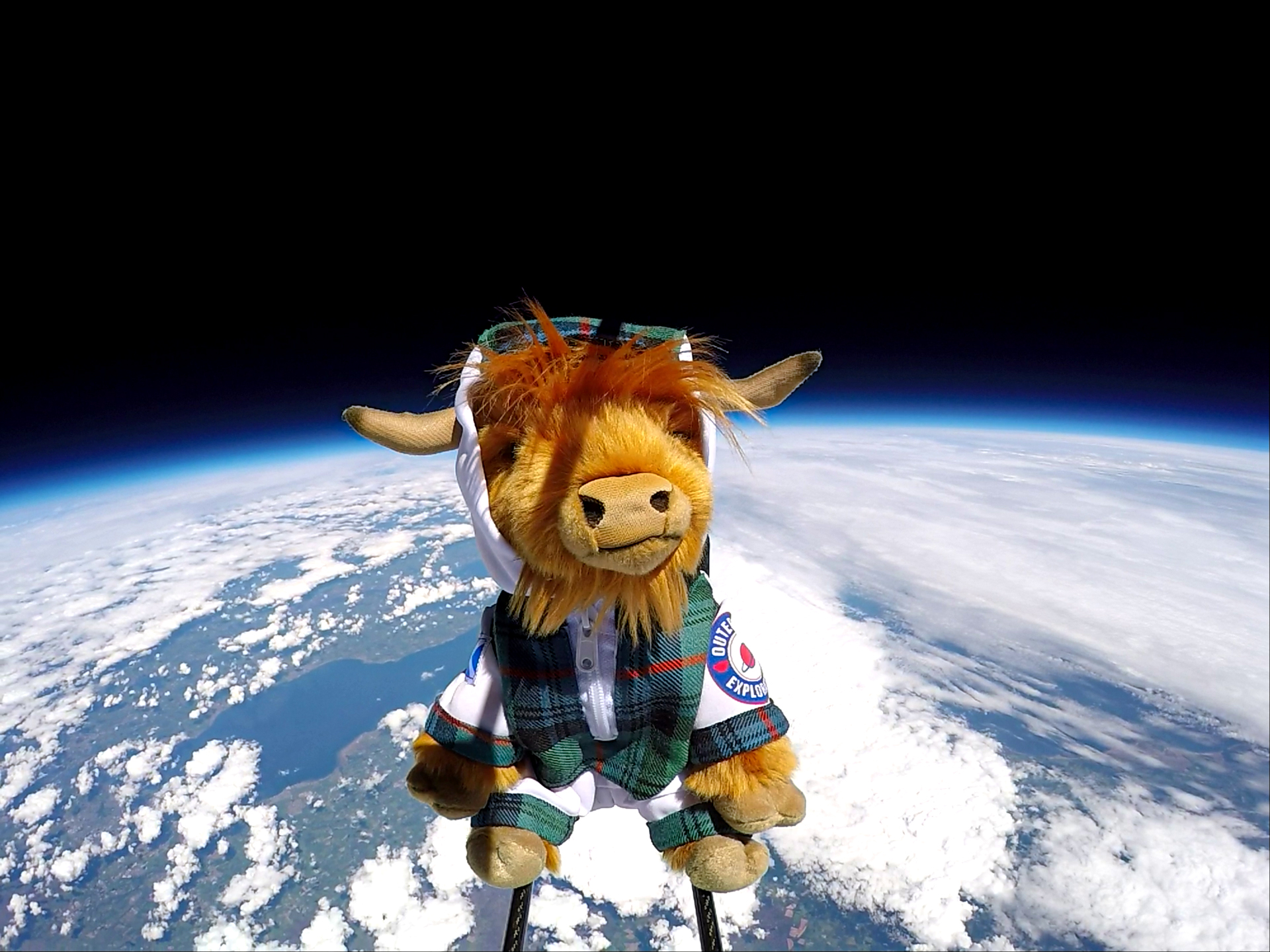 2019 marked the 50th anniversary of a truly momentous occasion – the first Moon landing. On the 16th of July 1969 astronauts Neil Armstrong, Buzz Aldrin and Michael Collins set off in Apollo 11 where they took one small step for man, and one giant leap for mankind!

But what on earth does this have to do with Scotland? Well, 2019 also marked the 50th anniversary of VisitScotland (Scotland’s national tourism organisation – or us!). So, with these two big occasions, we thought it was an opportunity to celebrate in a truly Scottish way – with something innovative and out of this world…

To celebrate this memorable anniversary, at the end of June 2019 VisitScotland launched the world’s first Highland Coosmonaut – a cuddly toy Highland coo (Scots word for cow) – into ‘near space’.
BuzzBò, named after Apollo 11 astronaut, Buzz Aldrin, and the Gaelic the word for cow, ‘Bò’, soared 36,000 metres from Gilnockie Tower near Langholm to the edge of the Earth’s atmosphere, before making his return.
The intrepid animal was named by 7-year-old Peter Lunan, of Dunblane, whose entry was chosen by the national tourism organisation in its national ‘Name the Highland Coosmonaut’ competition.
Dressed to impress, the coo was suited and booted in its very own custom-made spacesuit, complete with traditional Clan Armstrong tartan of course – supplied by Lochcarron of Scotland – which was specially made by Vintage Bunting in the Scottish Borders.

For World Space Week 2021, it has been revealed that, on his mission to near space and back, BuzzBò secretly carried with him a package of chilli seeds, specially selected by the Langholm Chilli Club in Dumfries and Galloway. The seeds were planted by members of the club this year and their astronomical harvest will be on display at the Langholm Chilli Festival, taking place in Langholm on 23 October. Celebrity chef, Tony Singh, met up with BuzzBò, after his hooves were safely back on Earth, and got his hands on some of the space-age spicy peppers, which he’ll be using to cook up quite the storm at the festival. 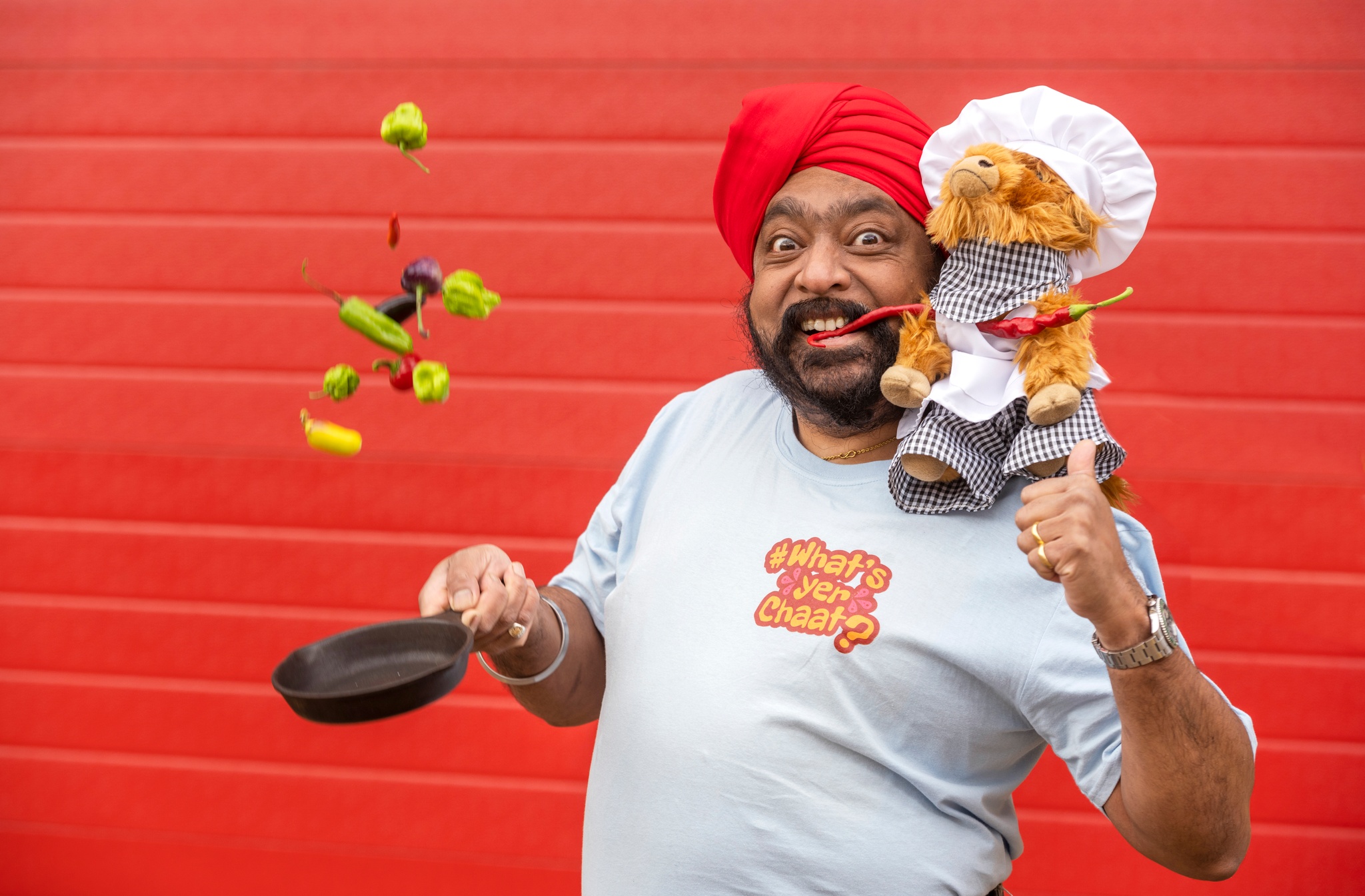 Out of this World Trail

Looking to enjoy an out-of-this-world experience? Browse the brand-new Scotland is Out of This World Trail where you can follow the map to explore an array of stellar attractions and locations across the country that all boast fascinating connections to outer space. From Loch Airigh in the Outer Hebrides with links to Jupiter, and the Isle of Coll which is Scotland’s Dark Sky Island, to Bonnybridge in Falkirk, the official UFO capital of Scotland, there are dozens of places where you can enjoy an out-of-this-world experience. 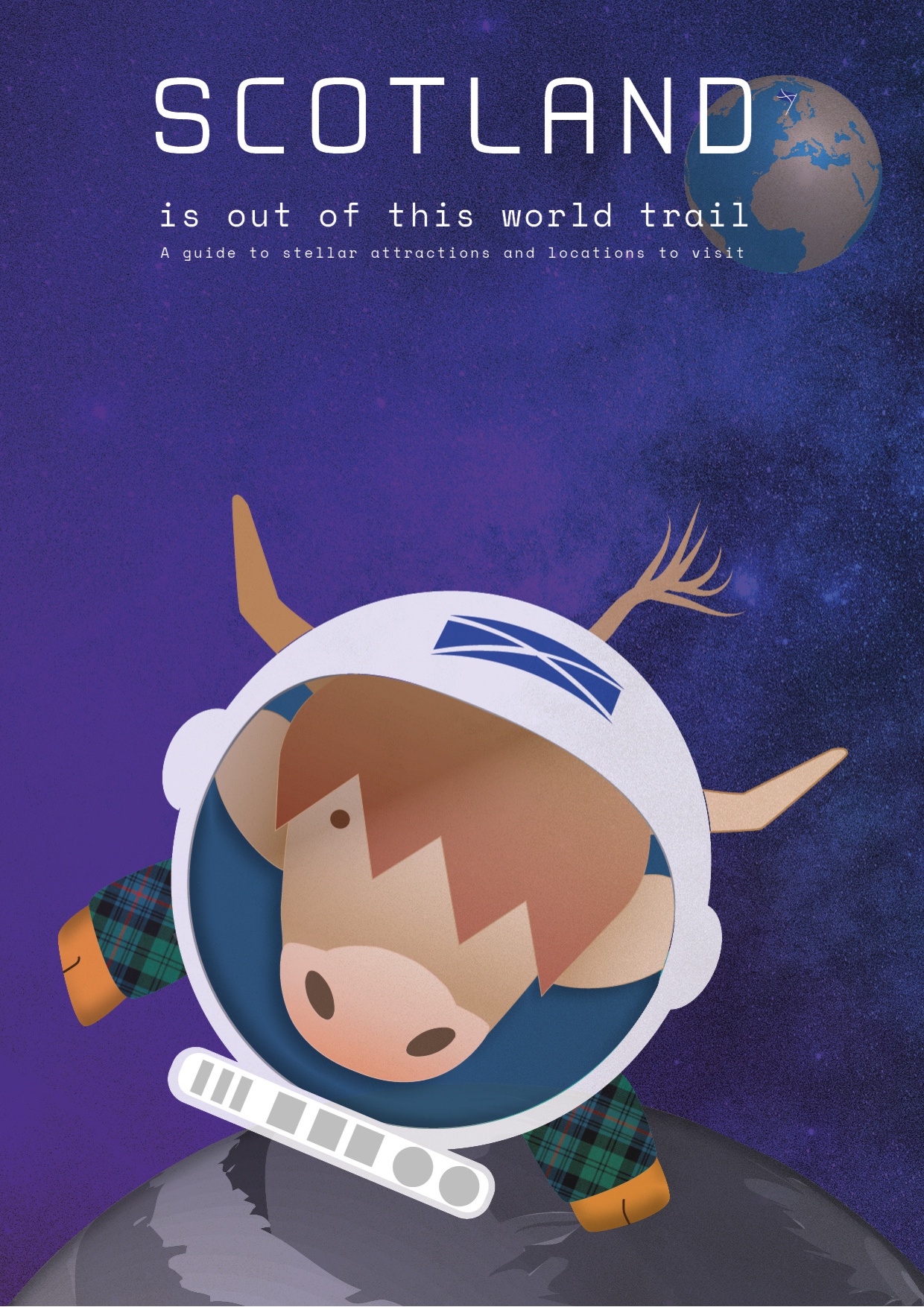 Scotland is Out of This World

Did you know that Neil Armstrong has connections to the Scottish clan Armstrong? Three years after the historic moment on the Moon, Neil Armstrong took another ‘small step’ into the history books, only this time in Langholm in Dumfries & Galloway, the ancestral home of Clan Armstrong. It was here in ‘Muckle Toon’ that he became the first and only Freeman of the town. When Armstrong accepted the honour, he told the audience: “It’s said that the most difficult place to be recognised is in one’s own home town. And I consider this, now, my home town.”

This picturesque town is the traditional seat of Clan Armstrong and it was here that this clan dominated the south western border in the 16th century. Head to Gilnockie Tower, a fine defensive pele tower, where you can explore the enthralling 500 years of history when Clan Armstrong thrived across the region. Delve into the fascinating clan history, mystery and discovery of the Armstrongs through a vaulted chamber, banqueting hall, spiral staircase, or venture on The Borders Reiver Trail, starting at the tower.

Undoubtedly, one of the most spectacular sights you can see across Scotland is the dark night sky dotted with sparkling stars, distant planets, and flashing meteors. Clatteringshaws Visitor Centre is one of the best places to enjoy the night sky – the visitor centre overlooks the darkest part of the Galloway Forest Park which ensures a particularly dramatic stellar show.

*Please note the Scottish Dark Sky Observatory is currently closed due to a recent fire.

It’s well known that Scotland has a fascinating and colourful past, but did you know a lot of that history involves Scottish clans? The term ‘clan’ means family or children in Gaelic, but not all Scottish clansmen were related to each other. From ancient origins in the Celtic, Norse, or Norman-French traditions, many Scottish clans had firmly planted their roots in the Highlands of Scotland by the 13th century. Today, many clans can be traced back to a specific part of Scotland, for example the MacLeods of Skye, the MacNeils of Barra or the MacNabs of St Fillan on Loch Earn. If you have ancestral ties and a clan history in Scotland, a trip to your clan’s homeland will be a true step back in time.

Scotland is home to many science-y centres and attractions where you can explore fascinating inventions, discoveries and learn all about the wonders of the world. Head to Glasgow Science Centre where you can uncover many exhibits, workshops, shows, activities, a planetarium and an IMAX cinema that will keep the family entertained for hours. In Edinburgh, Dynamic Earth is a great place to take the kids. Journey through time from when the Earth was first formed, all the way to the rainforests, icebergs and landscapes we know today. Make sure you stay to experience a film or two in the ShowDome Cinema – a 360-degree digital dome of technology! Elsewhere, venture to the Dundee and Aberdeen science centres where you can get hands-on with over 50 interactive exhibits, live science shows, ‘meet-the-scientist’ special events and lots more.

The Northern Lights (also called the Aurora Borealis) is a magical phenomenon that has fascinated scientists, explorers and mankind alike for centuries. Did you know that northern Scotland actually lies along the same latitude as Stavanger in Norway? This means that at certain times of the year (primarily the autumn and winter seasons) you’re in with a good chance of spotting this mesmerising light show in Scotland. Some of the most common places to spot these ‘Mirrie Dancers’ is in the northern corners – Shetland, Orkney, Caithness, Aberdeenshire, Moray Coast, and the Isles of Lewis and Harris in the Outer Hebrides – but it is possible to spot them across the country, even in Fife and Edinburgh. 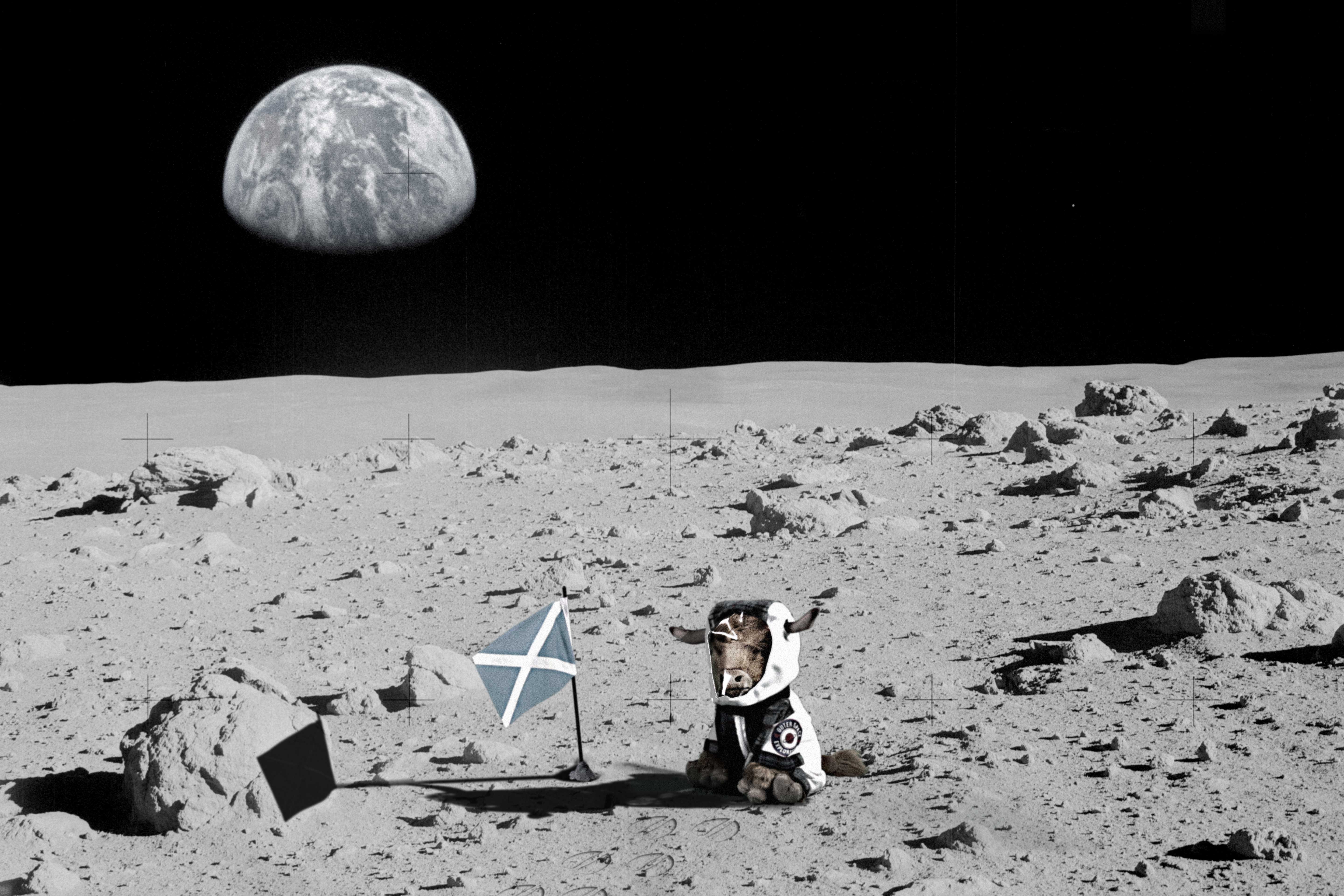 Wherever you venture in Scotland you can find attractions, locations and magical phenomenon that will make you feel like you’re a whole other world away.

Scottish Tree Festival 2021: See the wood and the trees this autumn!