A land laced with mystical Munros, captivating castles and wild woodlands, you are never too far from a fairy tale in Scotland. What legends will you uncover in Scotland’s Year of Stories 2022?

Come and visit one of these spellbinding spots and see what will spark your imagination.

Enter a cave full of mystery 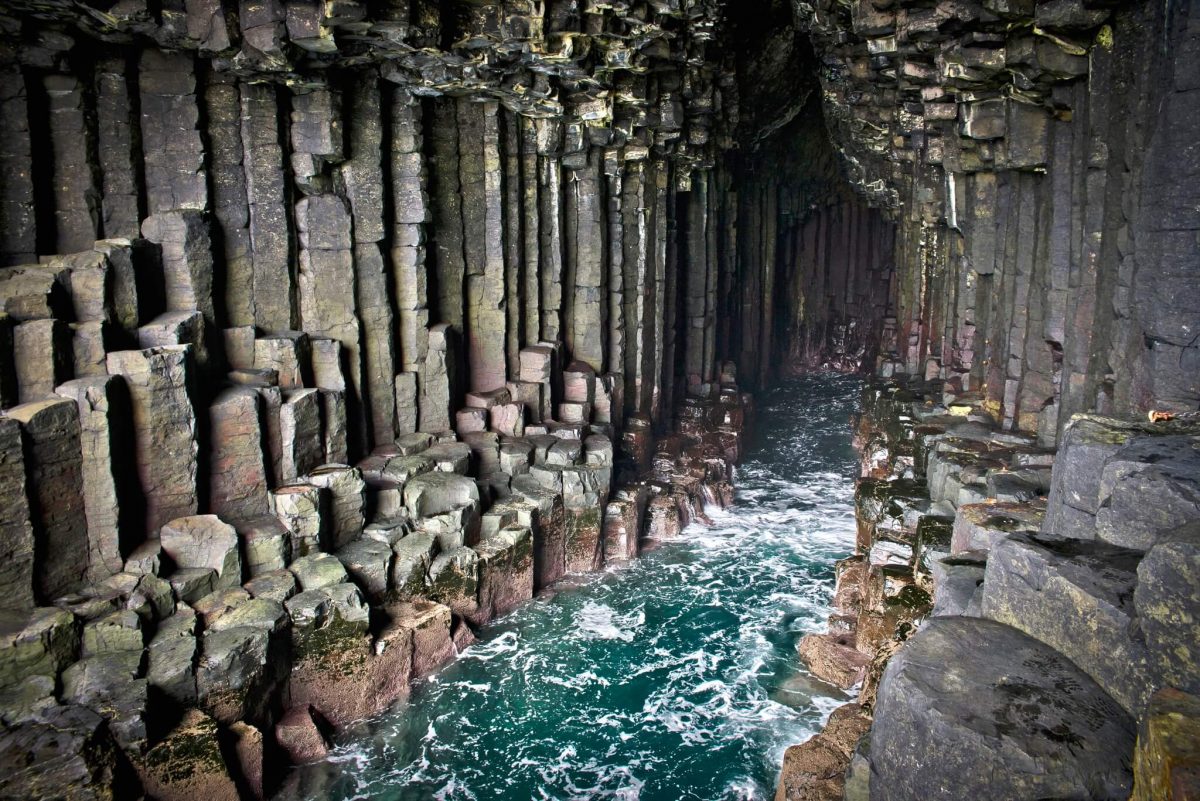 There’s one way to describe the beauty of Fingal’s Cave: otherworldly. Looming over the ocean, formed by symmetrical basalt columns, the cave is millions of years old. It was created by the same lava flow that created the Giant’s Causeway in Ireland, just across the water. Legend has it that these two features were the end pieces of a huge road built by the Irish giant Fionn mac Cumhaill, so he could make it to Scotland where he was to duel with Fingal, his gigantic rival. Inside the cave, echoes of crashing waves sing out in perfect harmony. Take a boat trip out to the cave to experience the atmosphere for yourself and see why this place has inspired poets and musicians, including Sir Walter Scott and Felix Mendelssohn.

Dip your toes into enchanted waters 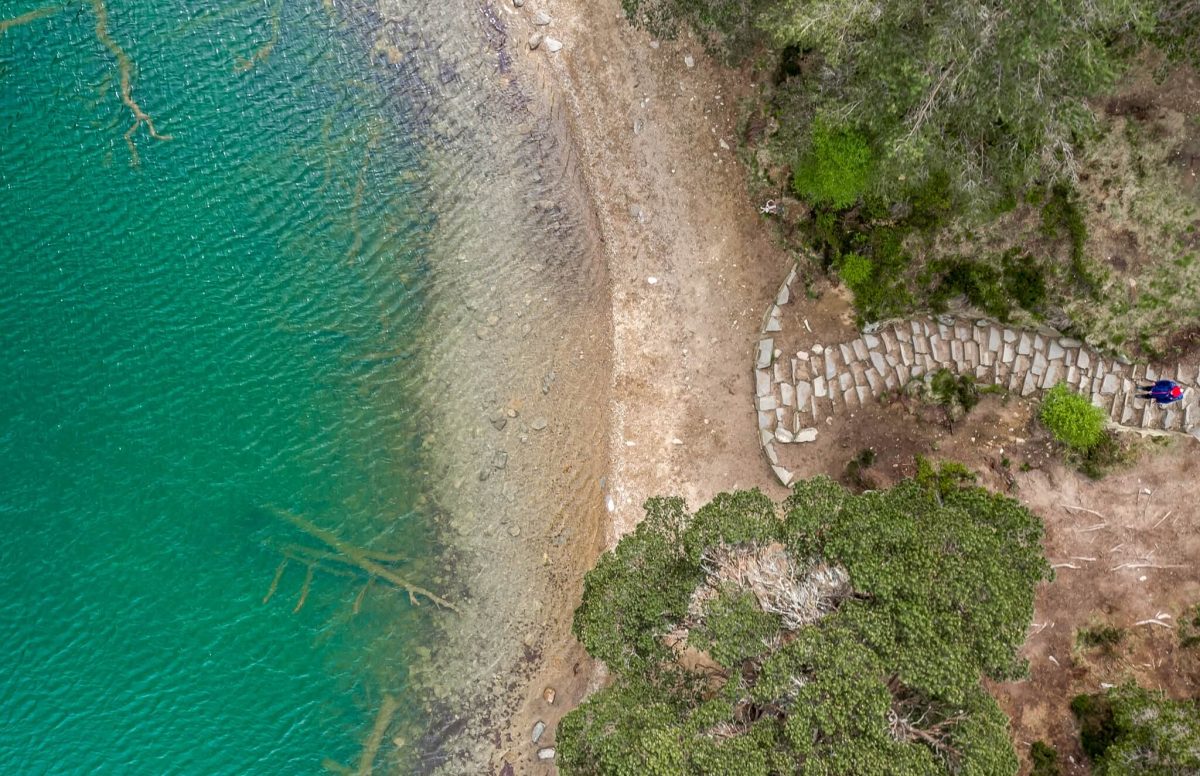 An Lochan Uaine – The Green Lochan

An amazing sight to behold, An Lochan Uaine in Glenmore Forest Park is thought to have turned its emerald green colour when Dòmhnall Mòr, the king of the pixies, washed his clothes in its waters. Or, so the story goes! Another explanation for the loch’s green tint is that it comes from the algae generated by decomposing wood lying along the loch floor, but we think the fairy story is much more interesting! There are some beautiful walks around the loch, including the Ryvoan ad Lochan Uaine circuit route which takes 2 – 3 hours. Or why not challenge yourself to explore some of the more mysterious and mountainous parts of the Cairngorms? 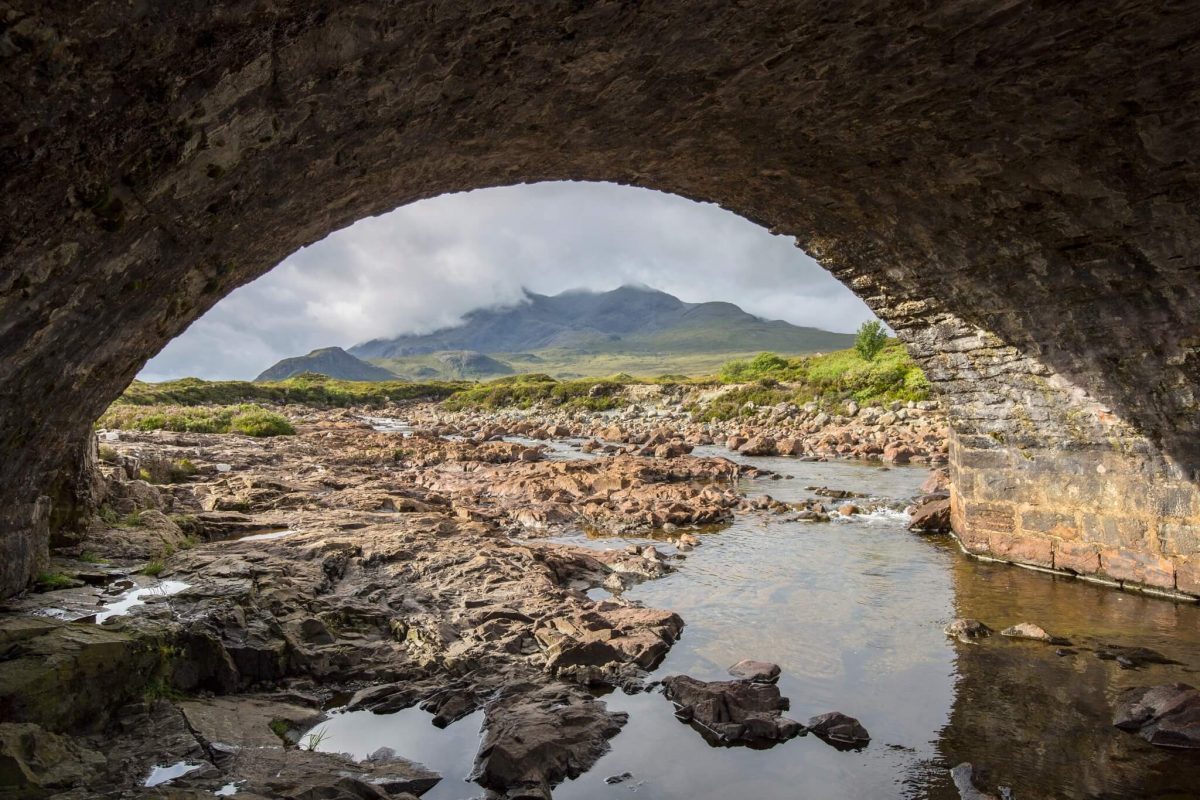 The Isle of Skye is a place brimming with myths and legends. According to folklore, the waters of the Sligachan Burn are enchanted – some say that dipping your face into the burn will grant you eternal beauty! There are mesmirising places to be found all over Skye, so make sure to visit the Fairy Glen or the Fairy Pools to immerse yourself in more of the island’s magic. Don’t forget to explore some of Skye’s undiscovered spots while you’re here.

There is something distinctly ethereal about Puck’s Glen. You can feel the presence of fairy folk and forest magic as you explore the glen, which is only a scenic hour’s drive from the Argyll town of Inveraray. Discover a world filled with rippling rock pools, trickling gorges and rustic wooden bridges with leaves gently falling from the dense canopy.

The 550 acres of Archerfield Estate are vast and beautiful, but the most extraordinary corner of the grounds is the Fairy Trail and Willow Walk, where magic awaits around every corner. Walk through the ancient woodland and search for hidden secrets in amongst the tall trees, willow structures, sculptures and behind fairy doors. After your walk, enjoy some local produce in the Garden Café, shop for plants, or pick up some goodies from the food market which sells treats from Edinburgh favourites, Mimi’s Bakehouse and I.J Mellis Cheesemongers.

The extensive Ardingklas Woodland Estate is home to the Gruffalo & Fairy Trail inspired by the children’s book by Julia Donaldson. Wander along the short walk which features a variety of extracts from the story, translated into Scots. Look out for the ‘moose’ who will help guide you along the way. Spend as long or as little time as you want here wandering through the woods – see if you can spot the fairy houses and stop by the Old Mill too. During spring and early summer, the woodland bursts with colour thanks to the bluebell carpet and extensive collection of rhododendrons and azaleas. 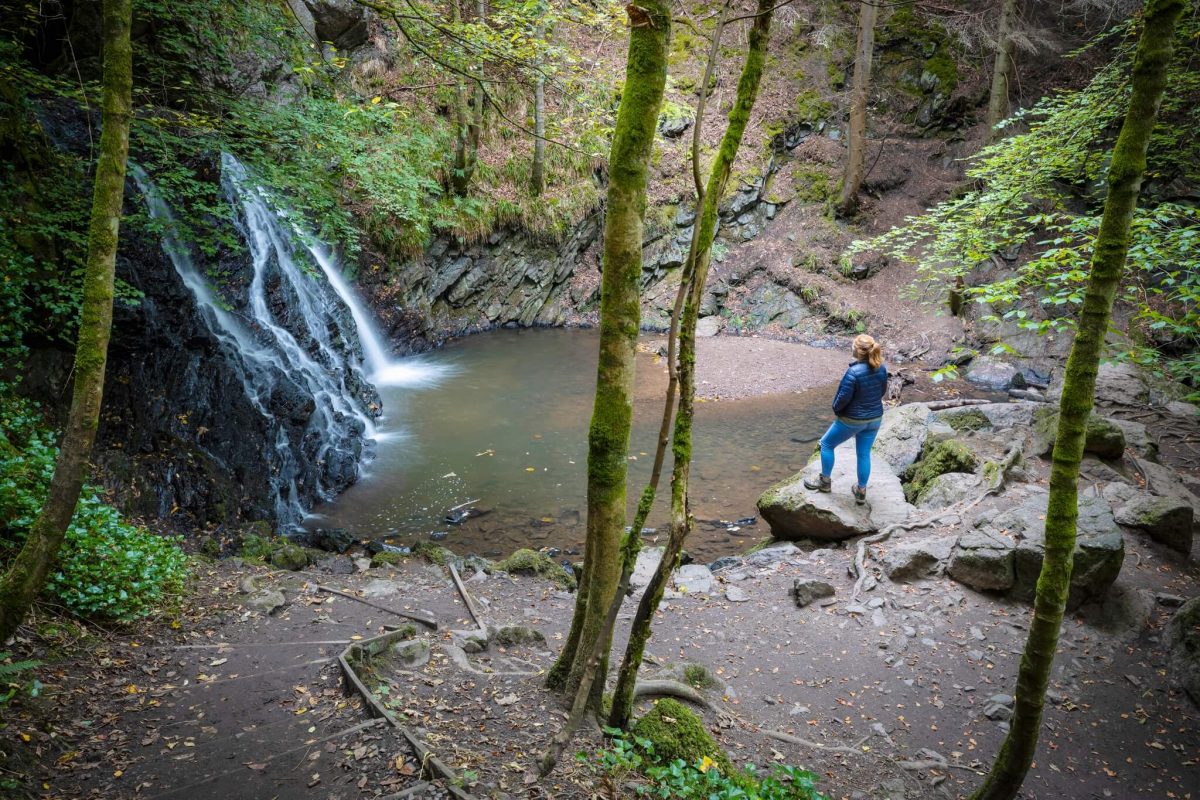 The Fairy Glen in Rosemarkie was once known for ‘well-dressing ceremonies’, where local children would decorate springs with flowers in the hope that the fairies would keep the water clean. Take a walk along its beautiful woodland paths and look out for waterfalls and the ‘Money Tree’, which features hundreds of old coins hammered into its bark as offerings to the fairies. There are a couple of other magical waterfalls in the area too, take a stroll to the breathtaking Falls of Foyers or the Divach Falls.

Find yourself a fairytale castle 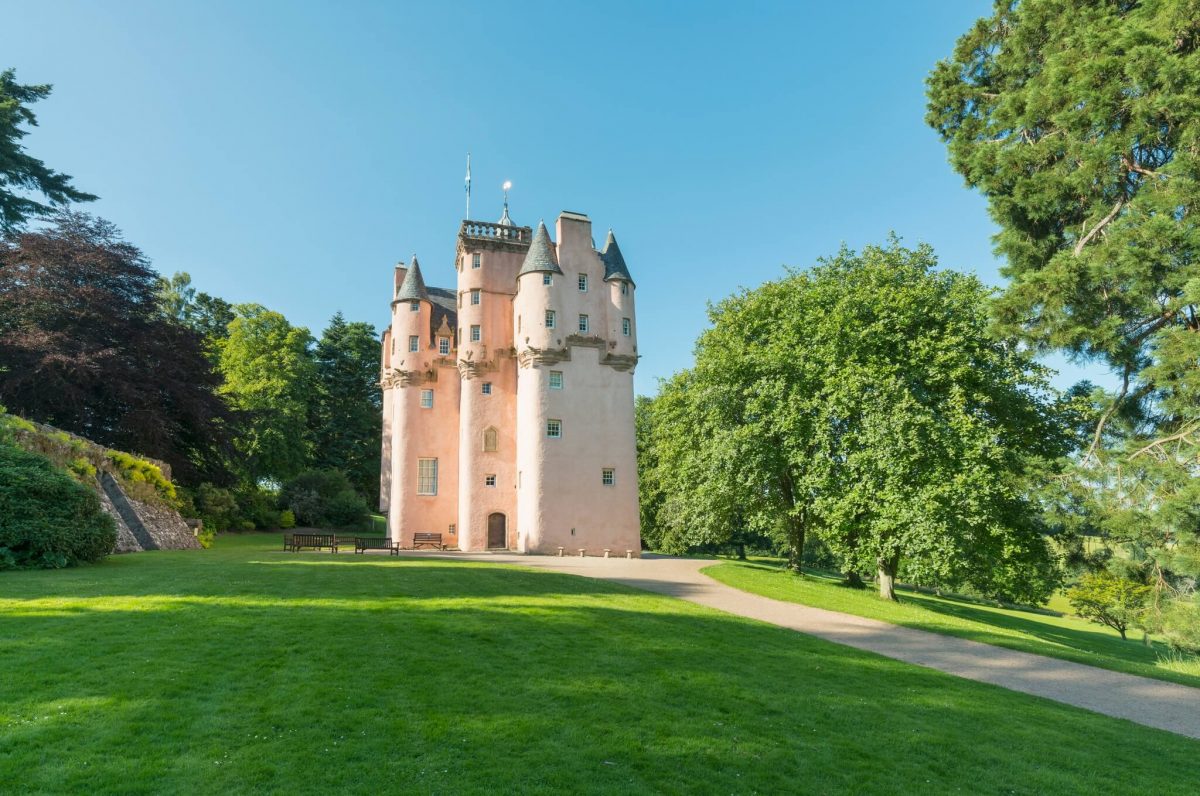 One of our favourite places to photograph, Craigievar Castle is a Baronial tower house dating back to the 16th century. It is spellbindingly beautiful – and a lovely shade of pink! Inside, the castle has an impressive collection of art, including a selection of Raeburn portraits. Go outside, and you can enjoy a peaceful stroll around the estate, with woodland glens and trails to explore, and red squirrels to keep you company. 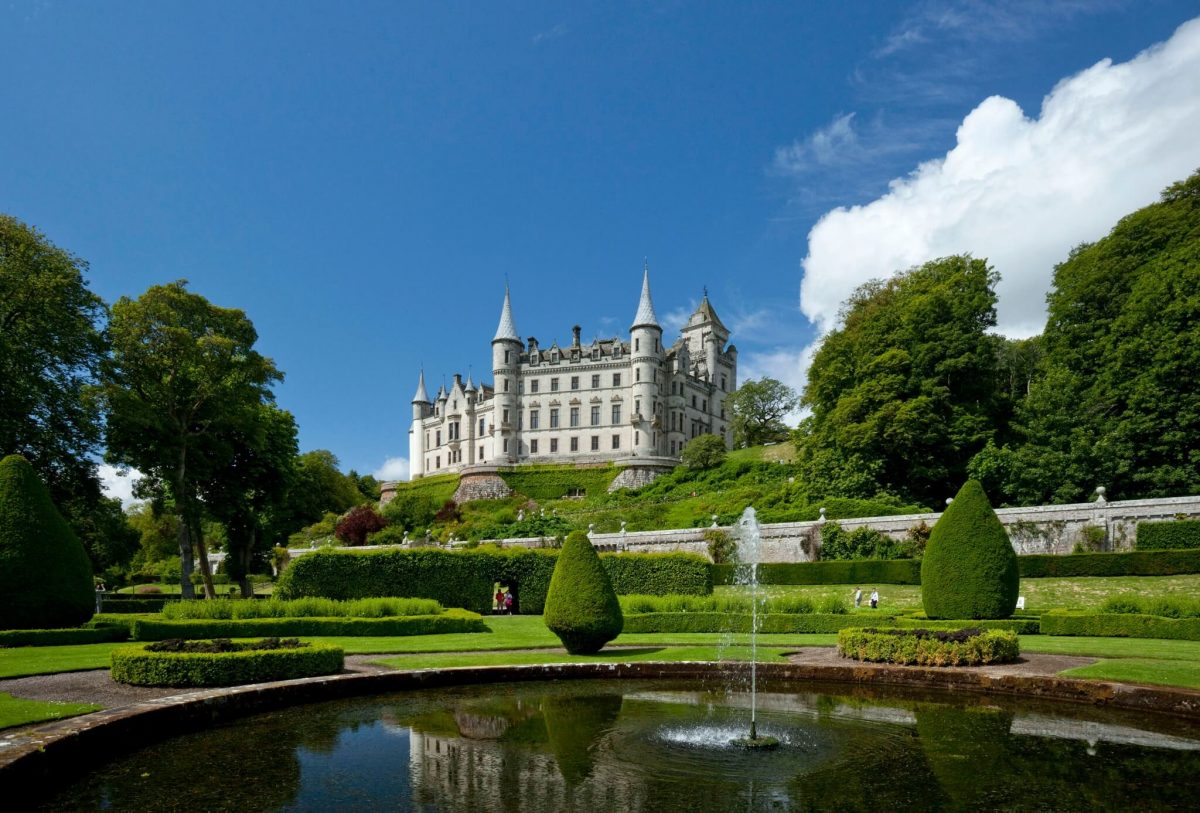 It may look like something Walt Disney would sketch, but Dunrobin Castle has lived through more than just a few fairytales. It was a war hospital during the First World War and a boarding school for boys between 1965 – 1972. A French-style chateau rising above the North Sea and looking over the Moray Firth, the castle is a treat for architecture lovers, and has been inhabited by Earls and Dukes of Sutherland since the 13th century. The spires were added by Sir Charles Barry, who also designed London’s Houses of Parliament.