You may already know that Scotland is rightly famed for producing the world’s finest whiskies, but did you know that each year more and more whisky distilleries are popping up around the country?

In 2017, seven new distilleries started production. In 2018, another four opened, followed by a further three in 2019. We even saw some distilleries open in 2020 and more will follow, including the exciting new Johnnie Walker Princes Street centre, in 2021.

Read on to learn more about Scotland’s new distilleries. 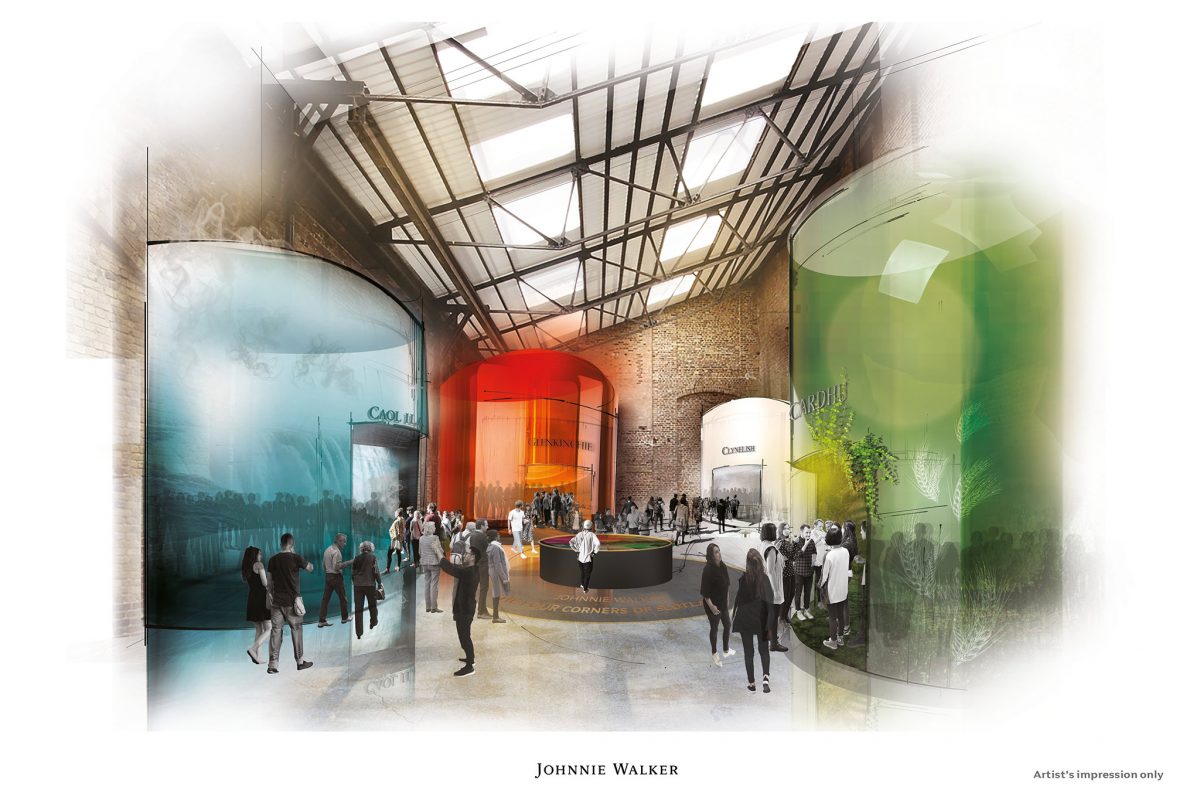 Summer 2021 has seen the eagerly-anticipated opening of the new flagship Johnnie Walker Princes Street centre in Edinburgh, which is now open for visitors.

Spread across eight floors, including rooftop bars and dining experiences, and with spectacular views over the city, this will surely become another of Scotland’s must-visit attractions. Expect their state-of-the-art visitor experience to be both captivating and immersive.

Billed as mainland Scotland’s most northerly distillery, 8 Doors are building a distillery, visitor centre and warehouse in John O’Groats, which is due to open in 2021. They plan to create whiskies from the very edge of Scotland that reflect their location and the local climate.

The distillery has been carefully designed to make the most of the amazing coastal views from their whisky lounge and visitor centre.

The original distillery here was founded in 1819 by the Duke of Sutherland and whisky giant Diageo is re-awakening this ‘lost’ distillery from its slumbers for the first time since it was mothballed in 1983.

The distillery’s founders plan to convert the old smokehouse in Luss into Glen Luss Distillery, which will also house a micro-brewery and museum. There will also be a retail space and visitors will be able to enjoy tasty food in the courtyard.

Alongside distillery experience walks, visitors will also have the option to join tasting and making experiences. And all of this set in the stunning shoreside surroundings of Loch Lomond. The distillery is expected to open in May 2021.

Falkirk is enjoying a bit of a renaissance when it comes to whisky production. Rosebank is a much-revered whisky, with remaining stocks continuing to command high prices.

Many were sad when the distillery was mothballed in 1993, then the visionaries at Ian Macleod Distillers purchased the site in 2017 and are currently restoring the distillery with the aim of opening it in summer 2021. The distillery will also feature a new visitor centre, as part of the multi-million-pound site renovations, and tours will be available in due course.

Plans for Ardgowan Distillery at Inverkip, west of Glasgow continue to take shape. The Cabrach Trust continues to develop its new distillery at Cabrach and construction began in July 2020 for the new Gordon & MacPhail Cairn Distillery near Grantown-on-Spey, which is due for completion in spring 2022. Speyside Distillers have also revealed plans to build a new distillery in Speyside too.  Further south, the new and innovative vertical Port of Leith Distillery in Edinburgh has broken ground and the building is starting to rise skyward.

On Islay, Scotland’s ‘whisky island’ off the Argyll coast, look out for a revival of Diageo’s ‘lost’ distillery of Port Ellen in future, swelling the number of distilleries here to ten. Jean Donnay, the owner of Glann ar Mor Distillery in Brittany, also plans to create a new distillery at Gartbreck Farm on Islay in the future. And Elixir Distillers have council-approved plans to build a distillery, visitor centre and educational facility near Port Ellen too.

Distilleries that opened in 2020 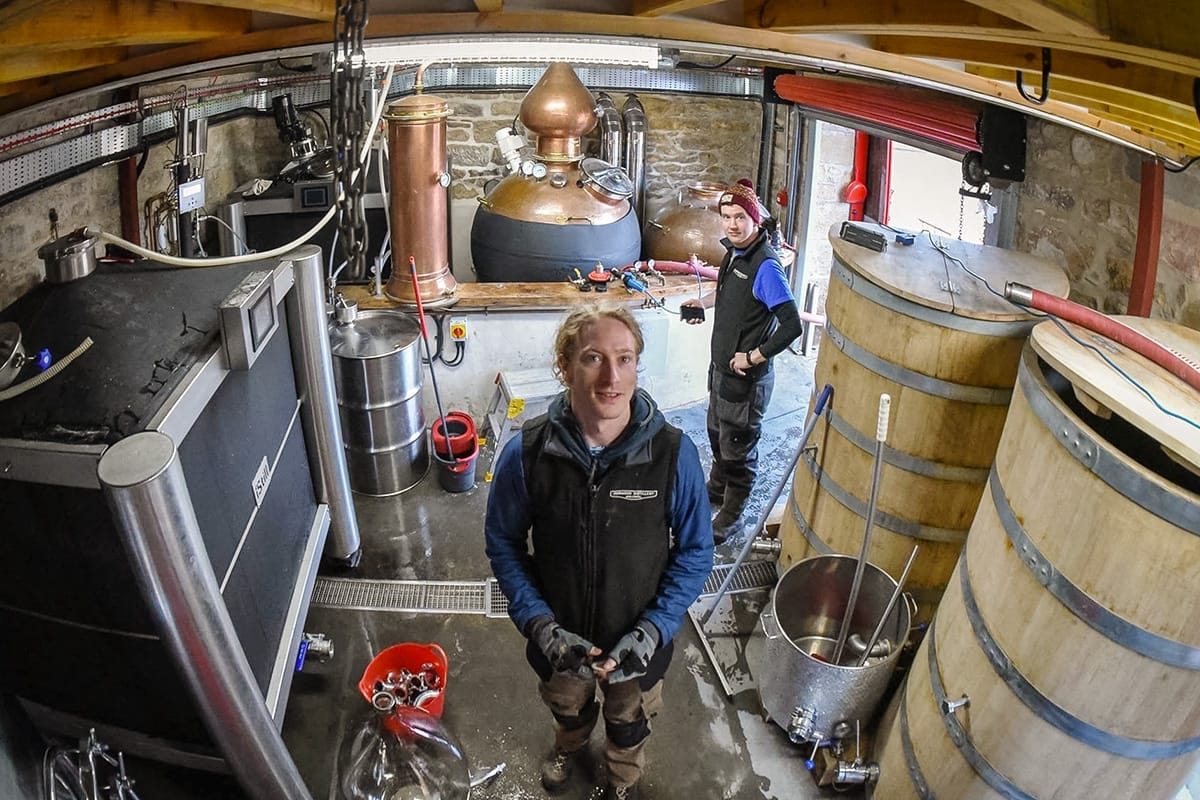 Brothers Phil and Simon Thompson founded the original Dornoch Distillery and started producing whisky in the refurbished quirky old ‘Fire House’ in the grounds of Dornoch Castle Hotel in December 2016.

They make it onto this list however, as they’ve since relocated to larger premises, still in the Highland town of Dornoch. They bottled whisky cask #1 as a first release in summer 2020 and are continuing to create their ‘old style’ Highland malts, alongside their popular organic gins. There is no visitor centre and tours are not available.

Using some of the purest mineral waters from the ancient Pannanich Wells, carefully crafted, small batch whisky production started up in Royal Deeside near Aberdeen, at the new Burn o’ Bennie Distillery in 2020.

The team here relocated from nearby smaller premises at Deeside Distillery, which they had outgrown. They are creating unique whiskies that combine the purest spring water with exceptional malts and the finest ex-oloroso and ex-bourbon casks available. There is no visitor centre and tours are not available.

Overcoming the challenges of 2020, the Stewart family achieved their ten-year dream of bringing whisky production back to the busy town of Falkirk, in the shape of Falkirk Distillery. The distillery site is surrounded by history, including the Roman-built Antonine Wall – a UNESCO World Heritage Site – and the water for its single malt is drawn from an artesian well on site.

The distillery started whisky production in October 2020. New make spirit will mature in the distillery’s own bonded warehouse and work continues on developing a visitor centre in 2021.

Halewood Artisanal Spirits have created a multi-million-pound distillery in the heart of Edinburgh and in so doing have brought whisky production back to Leith, in the north of the city – a former whisky epicentre in bygone times.

Construction of the Bonnington Distillery began in 2017 and concluded in December 2019, with production starting up in March 2020. They are producing peated and unpeated John Crabbie & Co whiskies. There are no visitor facilities here and tours are not available.

Distilleries that opened in 2019

The opening of Ardnahoe Distillery, taking Islay’s whisky distilleries to nine, further consolidates its title as ‘Scotland’s Whisky Island’. This distillery is wonderfully situated between Bunnahabhainn and Caol Ila distilleries, overlooking the Sound of Islay, and offers amazing views from the glass-fronted Still Room to the Paps of Jura.

Ardnahoe is distilling and maturing a classic peated style Islay single malt, using the finest barley and water from the depths of nearby Loch Ardnahoe itself. The incredible spirit, combined with stunning scenery, is sure to become a firm favourite with visitors.

Construction of the new Holyrood Distillery, in the heart of Edinburgh, was completed in the summer of 2019 and tours and tastings started up from July 2019.

It had been almost 100 years since single malt whisky was produced in Edinburgh, before this distillery opened. The team here are producing ‘full-flavoured spirits for anyone with an open mind and an open mouth’, and visitors can enjoy a hands-on, sensory visitor experience that will both surprise and delight.

The new distillery is housed in a carefully re-furbished 180-year-old B-listed building and is already a big hit with visitors to the capital.

Complementing their distillery in the north of the island at Lochranza, Isle of Arran Distillers Ltd opened their second distillery on the island at Lagg, on Arran’s southern tip, in the spring of 2019. This part of Arran has long associations with distilling, both illicit and legal.

The Lagg Distillery is producing a more heavily-peated style of single malt, distinct from its northern counterpart. The distillery features a welcoming visitor experience and visitors can enjoy distillery tours, tastings and a choice of restaurant or café dining, all with breathtaking views.

Distilleries that opened in 2018 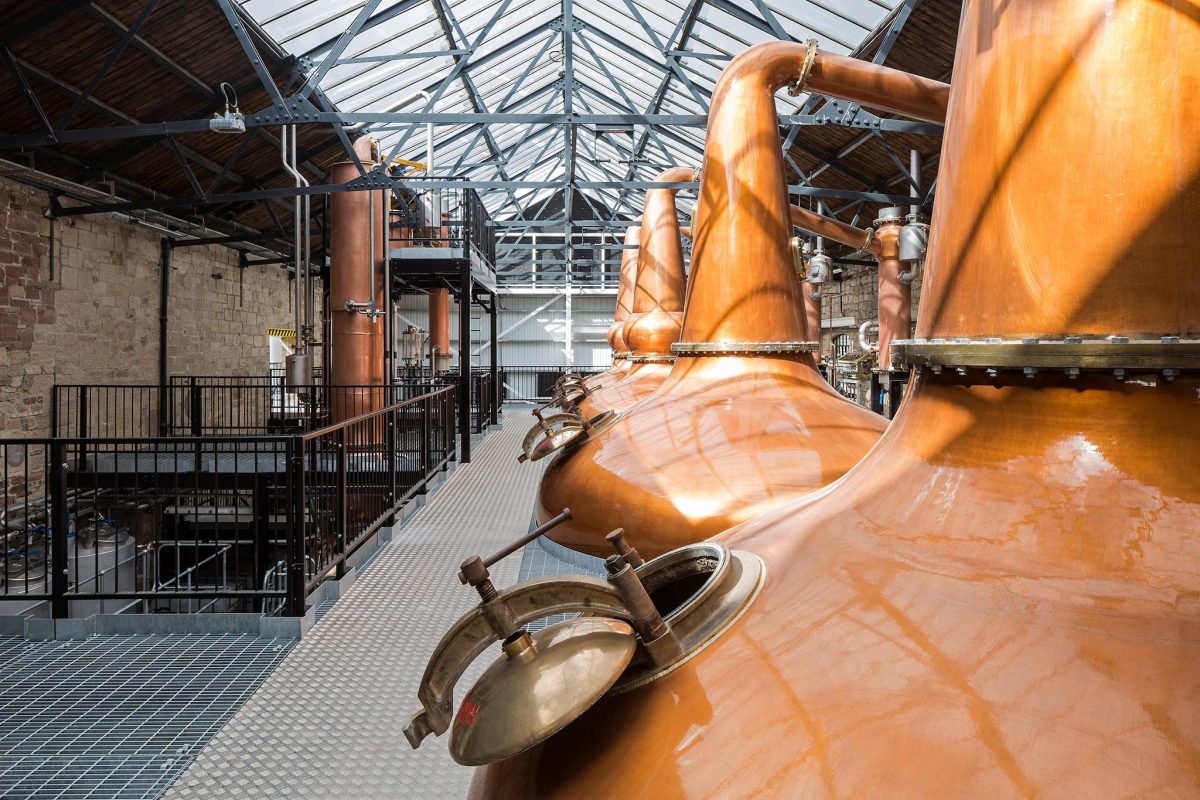 The Borders Distillery® is the first Scotch whisky distillery to open in the Scottish Borders since 1837. The new distillery can be found in the town of Hawick and occupies a B-listed historic industrial site in the town centre.

The former Hawick Urban Electric Company building has been completely restored and given a new lease of life. The distillery is producing single malt Scotch whisky and a premium gin. 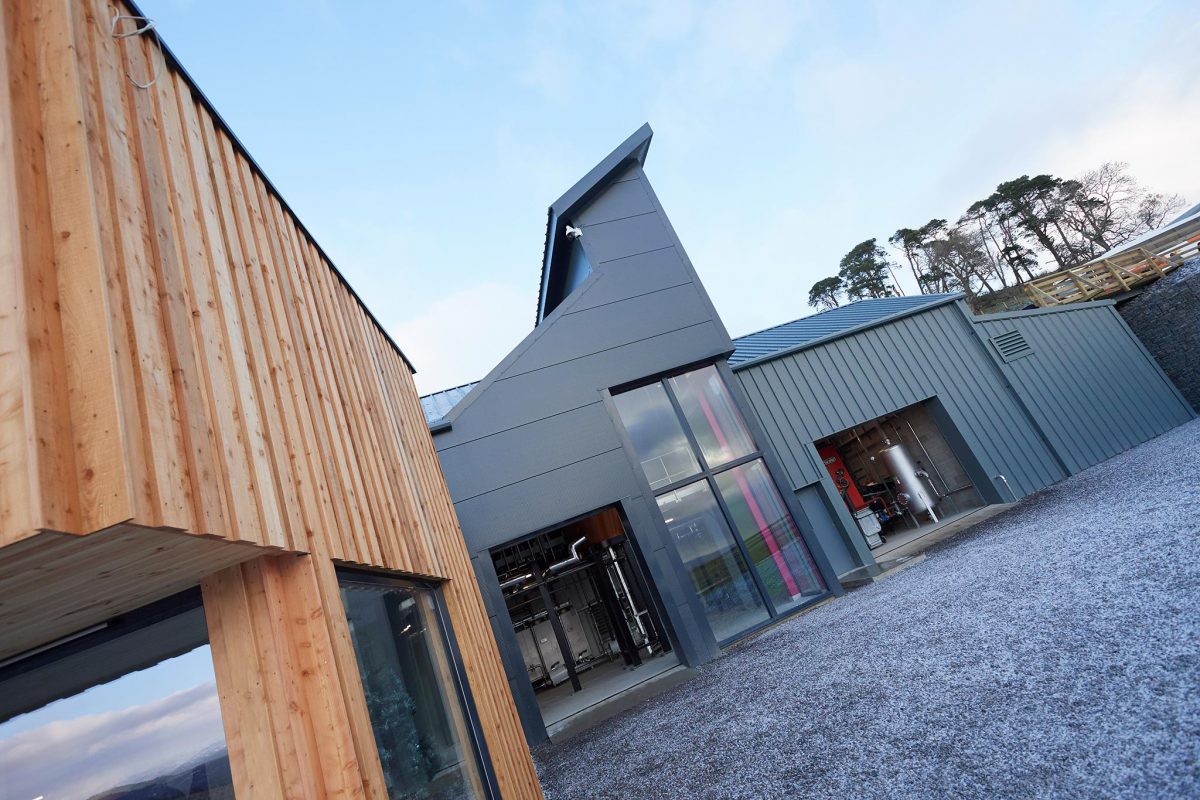 GlenWyvis Distillery was completed in 2017, and whisky production began on the 25 January 2018, just in time to commemorate Robert Burns’ birth in 1759.

Expect excellent unpeated single malt whiskies that will be ready to drink in 2021. The whiskies are created using only local barley and are matured in bourbon, refill bourbon and sherry casks. The distillery also produces GoodWill gin, which is known for its initial notes of orange and lemon, with the warmth of coriander and cinnamon following.

This state-of-the-art distillery, set on a hillside overlooking Dingwall and the Cromarty Firth, is run on solar, hydro, wind and biomass renewables. Call 01349 862005 for information about distillery tours. 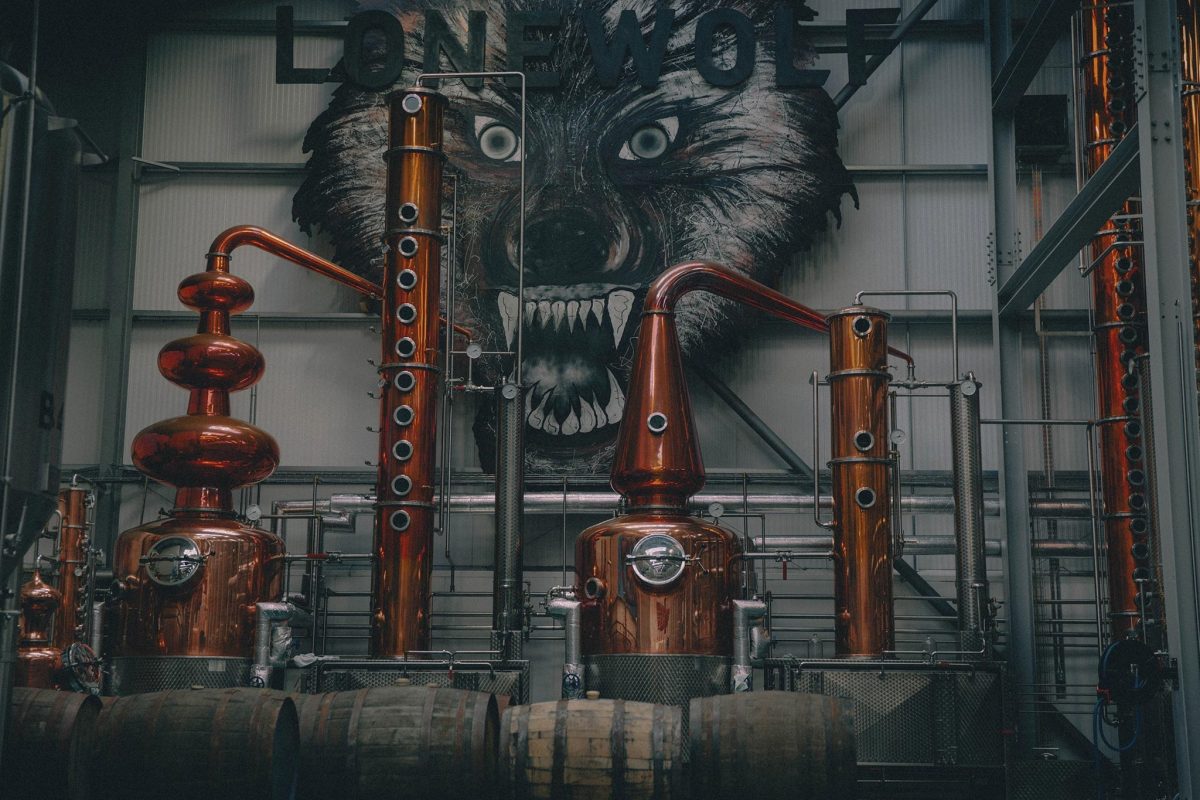 Located in rural Aberdeenshire, LoneWolf is a distillation subsidiary of BrewDog. This distillery produces gin and vodka from grain all the way through to glass and began whisky production in 2018.

They use the world’s only triple bubble still – just one of the ways that LoneWolf runs against the pack and strives to challenge production traditions. 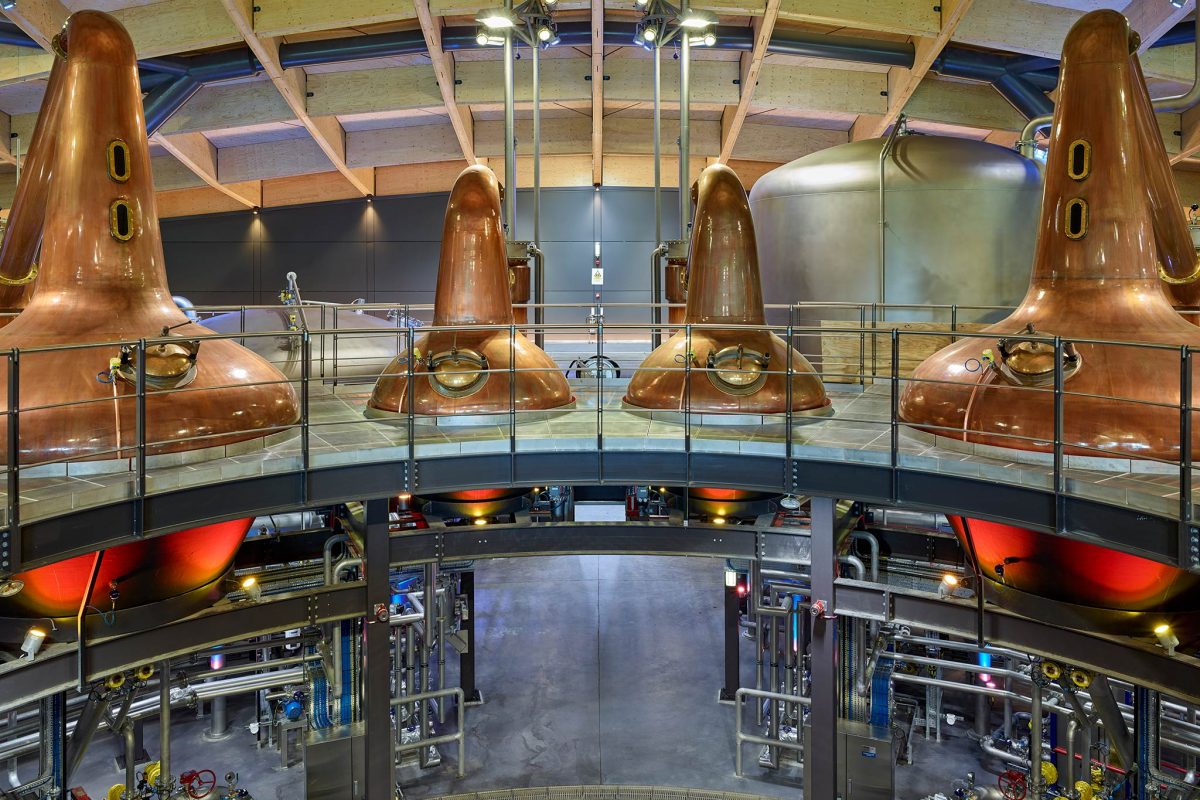 Just four of the many stills at the new Macallan Distillery, Speyside © Mark Power/Magnum Photos

The new Macallan distillery, an impressive, innovative and vast new site, which has been designed with the visitor experience central to its development, opened in Moray Speyside on 2 June 2018.

The project took three years and six months to complete and cost £140 million and you can watch the film to witness how this remarkable and unique new distillery was constructed.

Part of the visitor experience is Eat@TheMacallan, which offers the finest Scottish produce with a twist, taking inspiration from the long-standing relationship The Macallan has enjoyed with the Roca brothers, who run twice-voted best restaurant in the world El Celler de Can Roca in Girona, Spain.

To find out more about this collaboration, watch clips from Distilling Scotland with the Roca brothers on their culinary journey through Scotland.

Distilleries that opened in 2017

Can’t visit in person? Why not order straight from the distillery to try a dram from home? Check out our page on 18 amazing Scottish food & drink businesses to order from.

10 Best Places for Lunch in Edinburgh

6 of the best pizza places in Edinburgh, recommended by an Italian