I’ve savoured Scotch whisky in bars from Tollcross to Tain. From Toronto to Tokyo for that matter too. It has an aroma and flavour for me that instantly evokes Scotland. Uisge beatha in Gaelic, the ‘water of life’ since time immemorial, always to me means home. Whisky is Scotland’s national spirit, but is also integral to the national spirit of Scotland. I’m on a ferry with a dram in hand en route to the mystical ‘whisky isle’ of Islay on a quest to get to the heart of my favourite three whiskies, to eke out the flavours and landscapes behind these world renowned spirits.

Islay and the Lords of the Isles 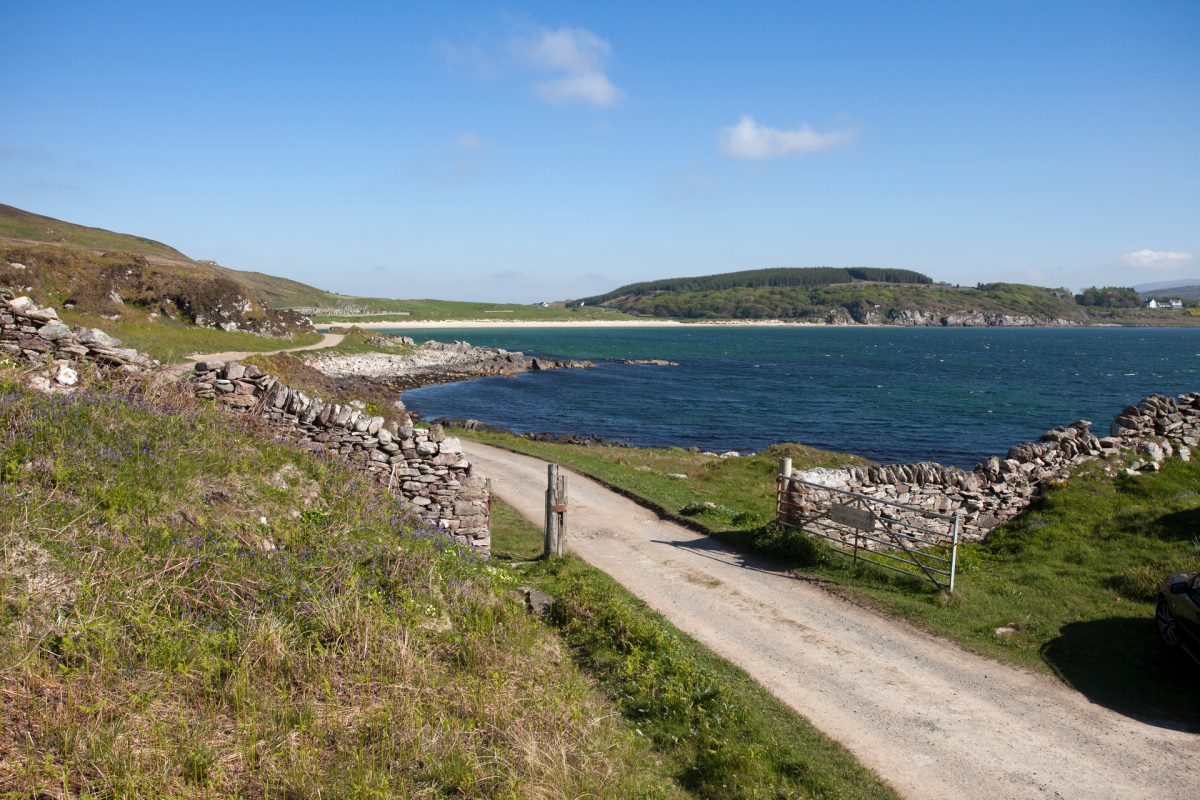 A single track road to a beach near Port Ellen on the Isle of Islay | VisitScotland / Paul Tomkins, all rights reserved

Before setting foot on Islay my knowledge of the island mainly swirled around the legendary Lords of the Isles, the once omnipotent rulers who held sway over Islay and a large swathe of the Hebrides. It is easy to see what first tempted them to this wild and wildly beautiful isle. The island is richly painted in vivid and dramatic colours.

Islay is an ever-changing collage of rolling hills, sweeping sand-strewn bays and craggy coast. If that wasn’t enough there is the backdrop of the shadowy ‘Paps of Jura’, the lofty mountain range that dominates the neighbouring island of Jura. On a clear day the coast of Ireland is clearly visible. Gaze west and across the vast emptiness of the cobalt Atlantic the next landfall is North America. 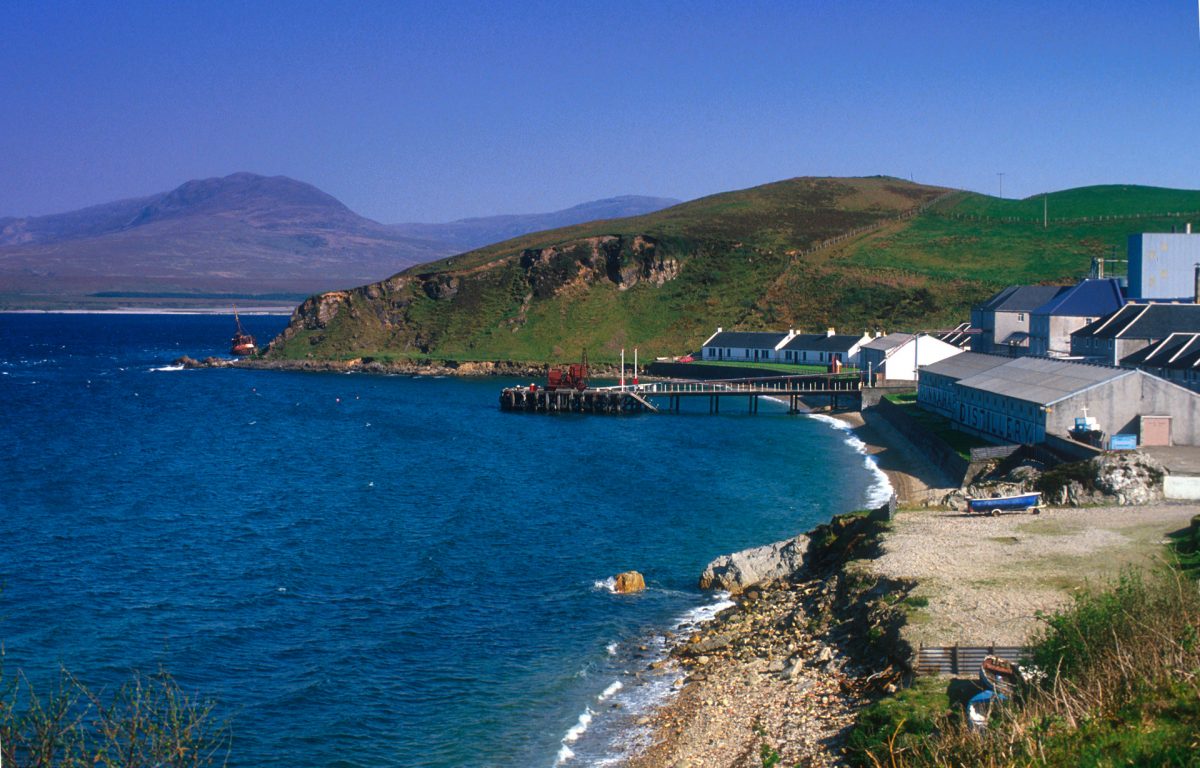 This epic beauty and romance is echoed in Islay’s current eight (a new distillery is in the pipeline) whisky distilleries, which produce single malts that are famous for their unmistakable aroma of smoke and peat. When this peaty malted barley aroma and flavour is combined with fresh Islay water and traces of seaweed it creates drams that draw in everyone from connoisseurs through to timid after dinner drinkers who normally profess to not liking whisky.

As I stand on the bow of the CalMac ferry I recall a French barman who once tried to convince me that terroir means little with any spirit. He reckoned spirits are much more industrial than wine and where and how they are made is not nearly as important as the provenance of his beloved wines.

This theory was blown out of the salty Atlantic waters when I caught my first sight of Islay’s distilleries. There, spread out along one peat and seaweed strewn coast, I first make out Ardbeg. Next up is Lagavulin and lastly Laphroaig. Right on the same stretch of coastline within walking distance of each other are my favourite three whisky distilleries in Scotland. That is terroir. 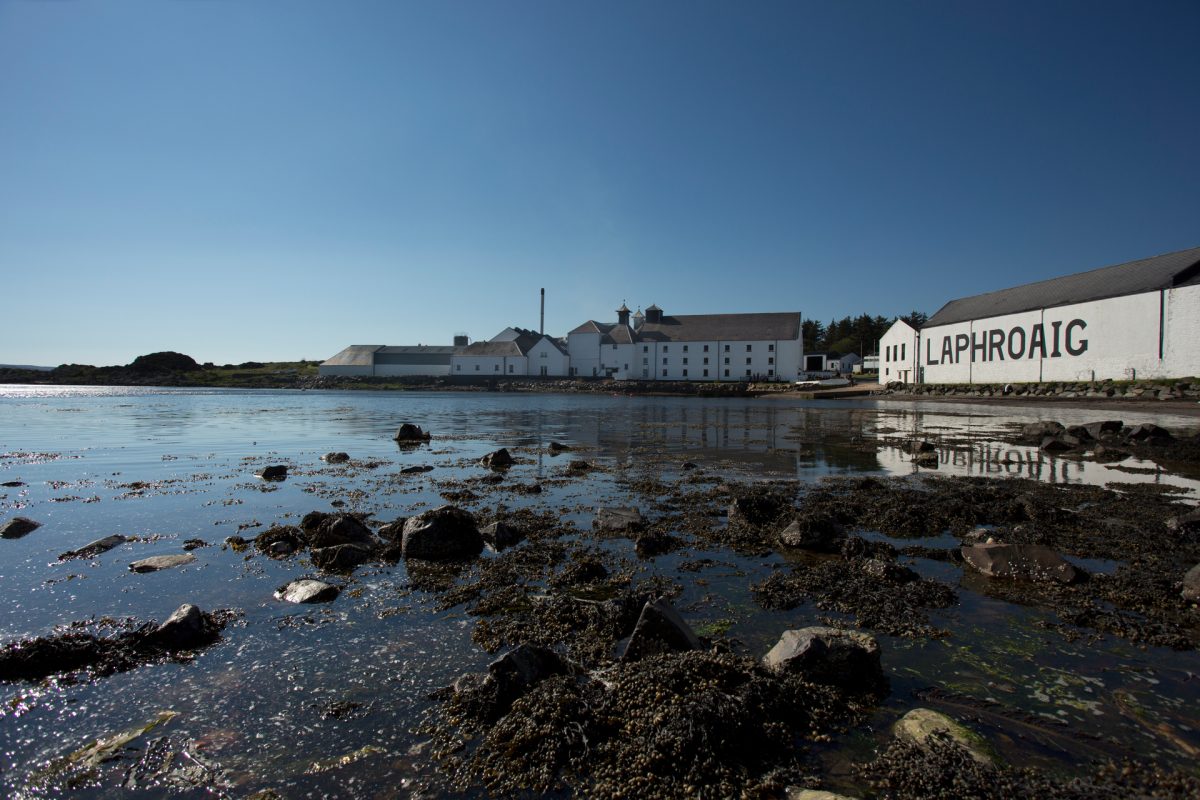 The Laphroaig Distillery on the Isle of Islay | VisitScotland / Paul Tomkins, all rights reserved

My first pilgrimage is to Laphroaig. The distillery is a stunner. Its massive whitewashed façade stands proud against the pounding Atlantic surf. Sea spray fills the air as I embark on my first tour of the day. It is the ‘Distillers Wares’ experience. For two and a half hours I delve beyond the bottom of my glass to learn more about this deliciously smoky malt. I learn just how Laphroaig is created, nurtured and then matured. In the warehouse I enjoy a selection of malts straight from the cask, before bottling my own to take home. 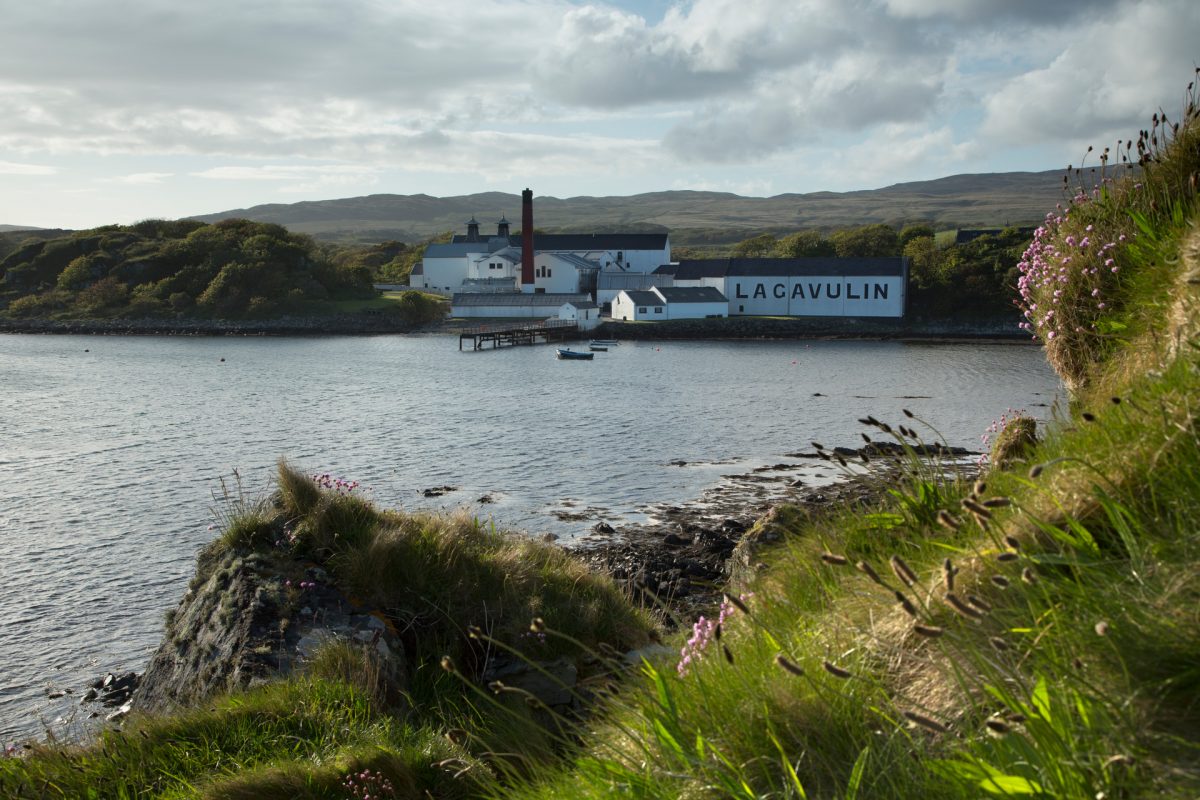 The Lagavulin Distillery on the Isle of Islay | VisitScotland / Paul Tomkins, all rights reserved.

Next up is Lagavulin. Handily a new walkway and cycle route has been built along this southern coast of Islay, meaning you can easily make a day of it and take in all three distilleries on foot or two wheels. As I plan on sampling a few drams two feet it is. Lagavulin offers one of the most laidback visitor experiences in Scotland. I just wander in and an ultra friendly lady in their wee shop points me around the corner to a sumptuous room bedecked in the style of a grand Scottish country house. I sit in a big leather chair by a roaring fire enjoying a complimentary dram of their deliciously smooth peat smoke reeking 16-year-old. 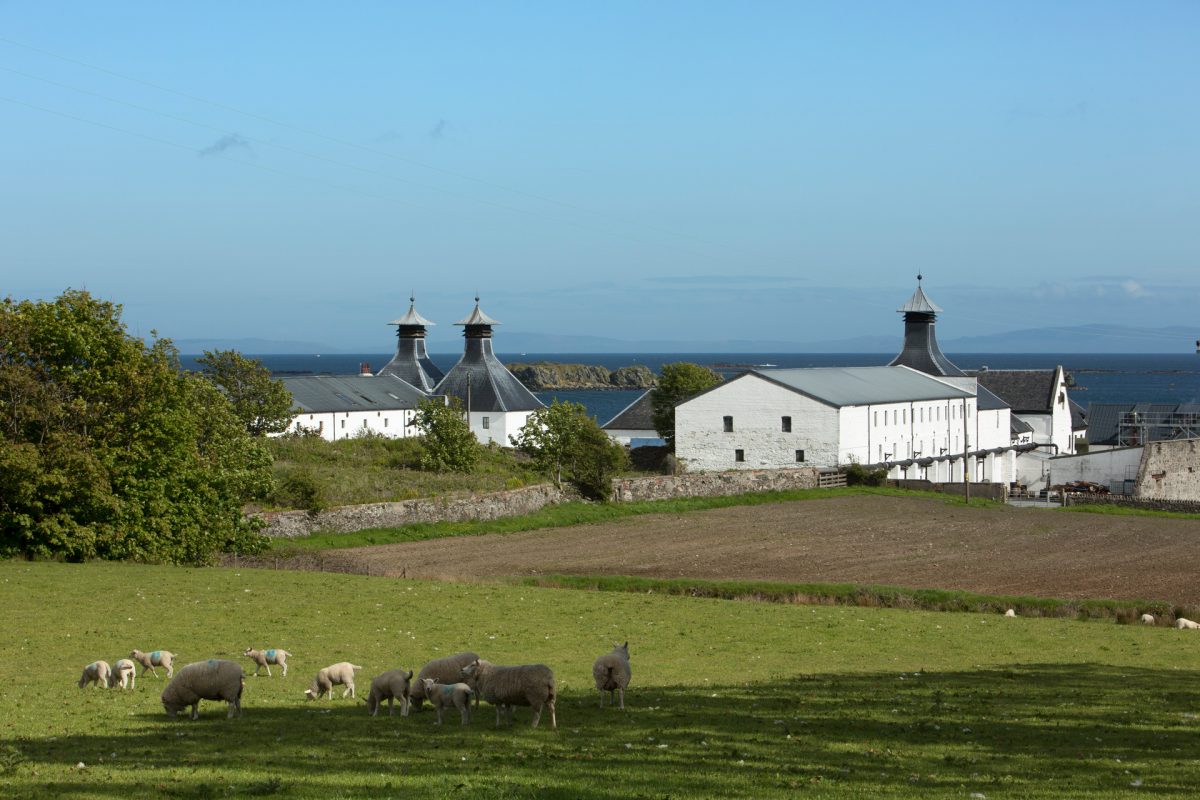 The Ardbeg Distillery on the Isle of Islay | VisitScotland / Paul Tomkins, all rights reserved

Last but certainly not least I make my way along to Ardbeg. The wind has whipped up now and my face is kissed with a waft of Atlantic surf, instantly evoking Ardbeg’s sweet, salty intensity. Ardbeg is an impressive distillery. It was mothballed in 1981 and left for dead. It was bravely re-opened in 1997 and has not looked back ever since.

Ardbeg offer an impressive range of tours. I opt for the ‘Ardbeg Across the Decades’ that helps me get closer to the spirit of Ardbeg, my favourite single malt. I learn about the history of the community of Ardbeg and the methods of whisky production here through a collage of old photographs and tales. A dram from each decade of Ardbeg’s whisky production since the 1970s adds an extra spice of drama to the tall whisky tales. Ardbeg also boasts a café and a restaurant where smoky Ardbeg makes its way into dishes. I struggle to choose between haggis laced with a creamy Ardbeg sauce and an Ardbeg infused Islay beef casserole.

I want to know more about Ardbeg. To get closer to its spirit. I get my chance chatting to one of the stillmen. He suggests I hike up to Loch Uigeadail, the source of the water that helps make my favourite malt so special. His directions prove spot on as I ramble up the rough hillside behind the distillery, taking in the ruins of a long lost village as I go. Eventually I reach my destination and the mist obligingly lifts to reveal Loch Uigeadail in all its glory.

Eventually as the sun melts down over the Atlantic and the sky erupts in fiery reds and burning oranges it is time to leave my three southern dames behind. I first ‘return’ some Ardbeg to Loch Uigeadail and then head for the welcoming embrace of the Port Charlotte Hotel.

Here I tuck into oysters with a shot of Laphroaig whisky. Then it is on to plump local king scallops plucked from the waters of Loch Indaal right outside the window. They are marinated, of course, in Lagavulin. I raise a toast to Islay and to uisge beatha. I can now enjoy it in Tollcross, Toronto or Tokyo with an intimate knowledge of where the spirit of this most special of spirits first breathed the peat smoke and salty Atlantic air of Islay.

To learn more about Islay and its distilleries, please visit our Isle of Islay page or read our Islay Whisky Distilleries Guide.

Scottish sailing events you won’t want to miss in 2019

Get reading for Book Week Scotland 2014