Visiting our craft breweries and brewpubs is a great way to get a real taste of Scotland. They offer wonderful tours of discovery, where brewers, with their infectious enthusiasm, share their secrets of the art of brewing.

We’ve been brewing in Scotland for 5,000 years and some of our breweries are found in secluded places that can often only be reached by car. That’s bad news for the driver! So what to do? Some are close to railway stations so, as an old advertising slogan once said, why not ‘let the train take the strain’? That way everyone can enjoy some tasty Scottish beers.

Here are a few suggestions for our Rail Ale Trails. Each can, of course, be split over a number of days.

Affectionately known as ‘Auld Reekie’ – the nickname is thought to come from the sweet, malty-smelling breweries – Edinburgh has long connections with brewing. Between the 19th and 20th centuries, the city was home to over 40 breweries including big producers such as William Younger and William McEwan. Today, many of the larger breweries have gone and been replaced with smaller breweries and welcoming brewpubs within easy reach of each other. 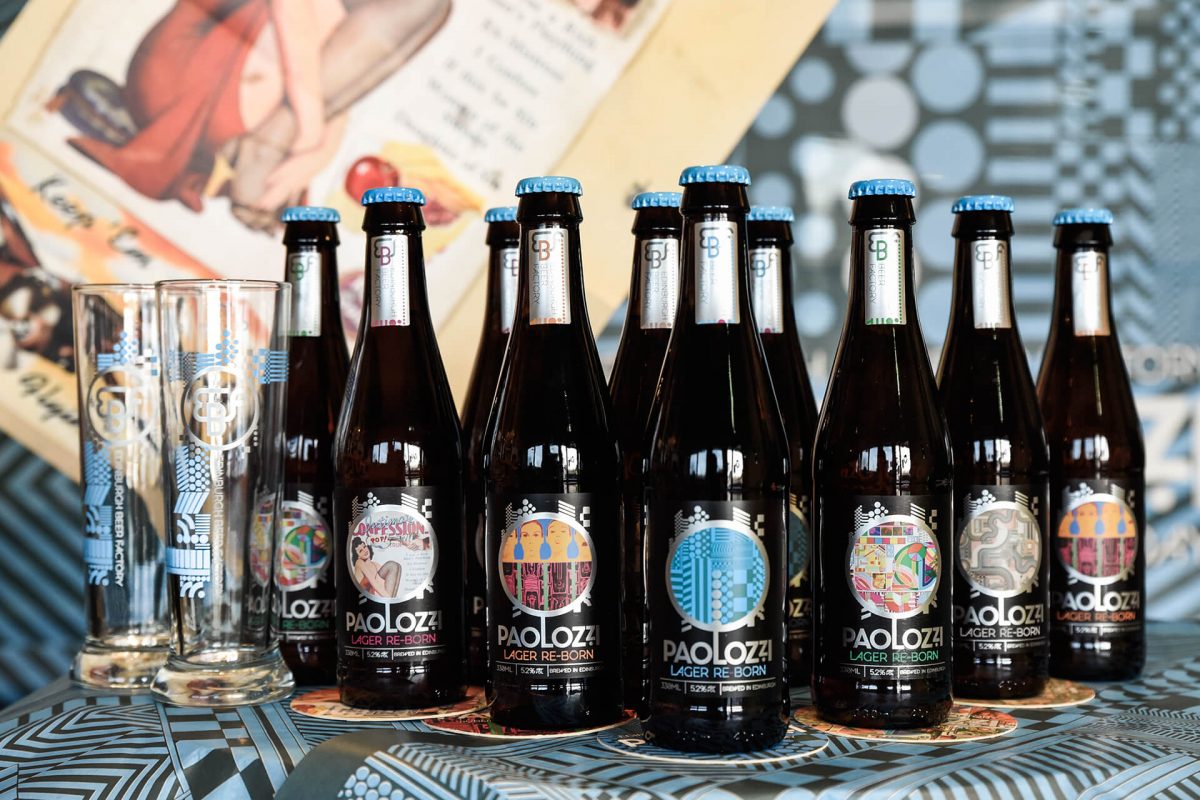 Our first stop is at Edinburgh Beer Factory, just a short taxi ride from Edinburgh Gateway or a short walk from Edinburgh Park. With a varied range of brews, named and inspired by the artwork of Eduardo Paolozzi, the beers here are never dull!

Then it’s a five minute walk to the Bankhead tram stop. Heading into the city centre, get off in the West End and walk five minutes to BrewDog Lothian Road – Edinburgh Castle provides a dramatic backdrop. A minute more takes you to the Innis & Gunn Beer Kitchen, where tasty beers and food are served – you can also book a brew your own session! A further minute takes you to The Hanging Bat brewpub.

Heading back into town to Howe Street brings you to six°north, where they offer delicious Belgian-influenced beers from their brewery in Laurencekirk, Aberdeenshire. 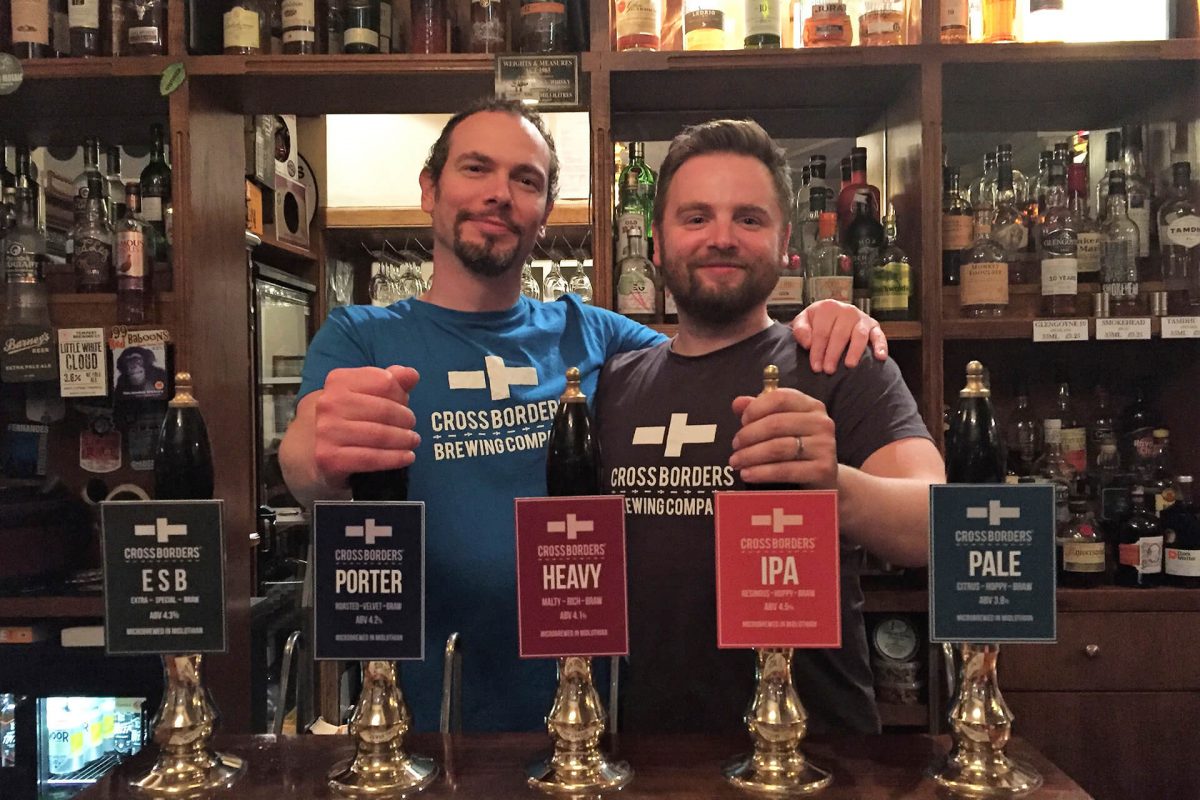 Next, walk to Waverley Station and take the Borders Railway service to Eskbank Station where you can try the ‘braw’ beers of the Cross Border Brewing Company – it’s just a short walk from the station. Stewart Brewing in Loanhead is a short taxi ride away, where you can brew your own. 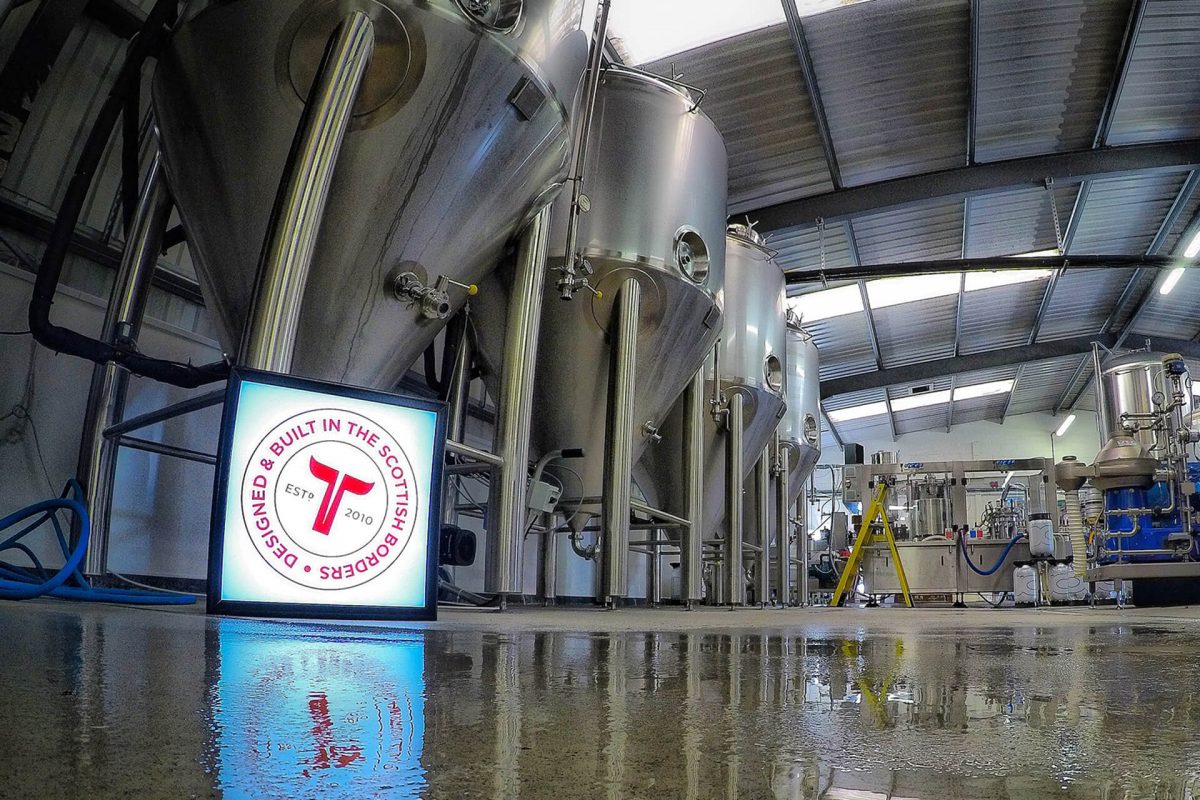 Then it’s back on the southbound train to head for Tweedbank Station and the award-winning Tempest Brew Co. in Galashiels, where they produce tasty Scottish beers with global influences. 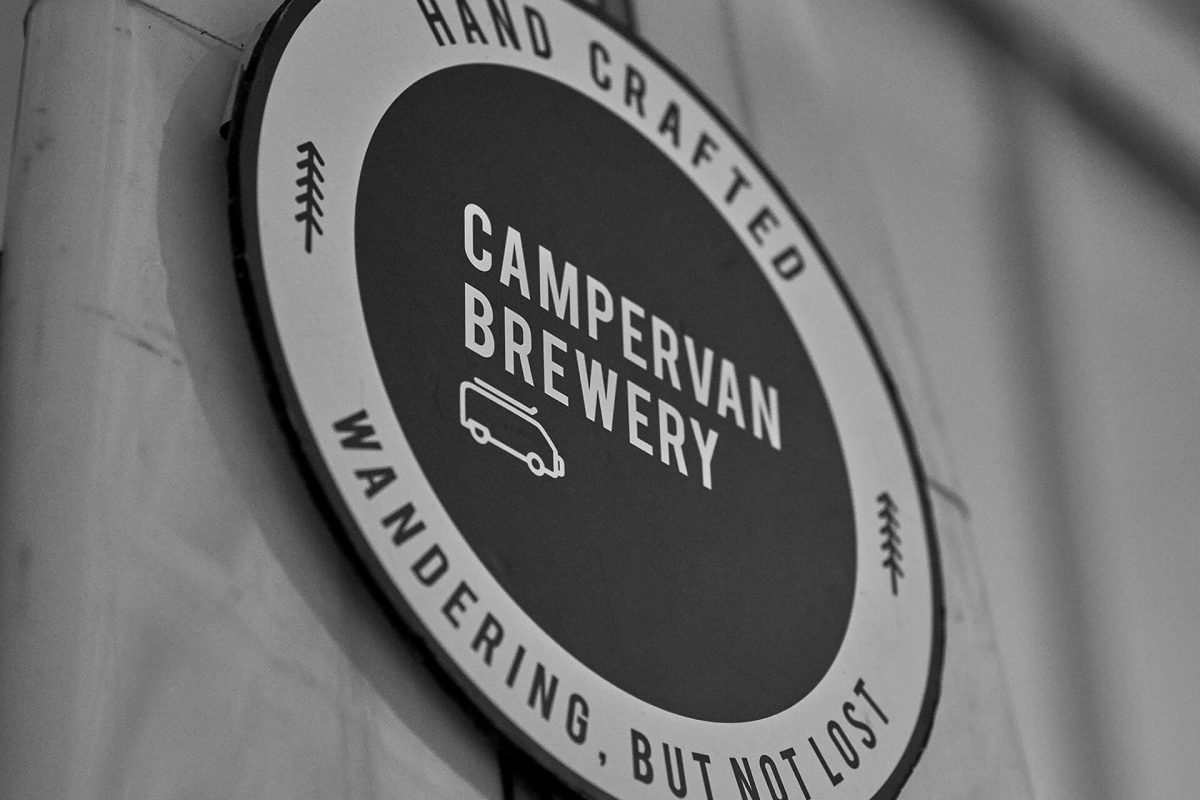 Our second trail starts from Waverley Station. Walk to Princes Street and take the 22 or 25 bus or a taxi down Leith Walk to the Campervan Brewery, where they produce amazing beers using all sorts of interesting ingredients. 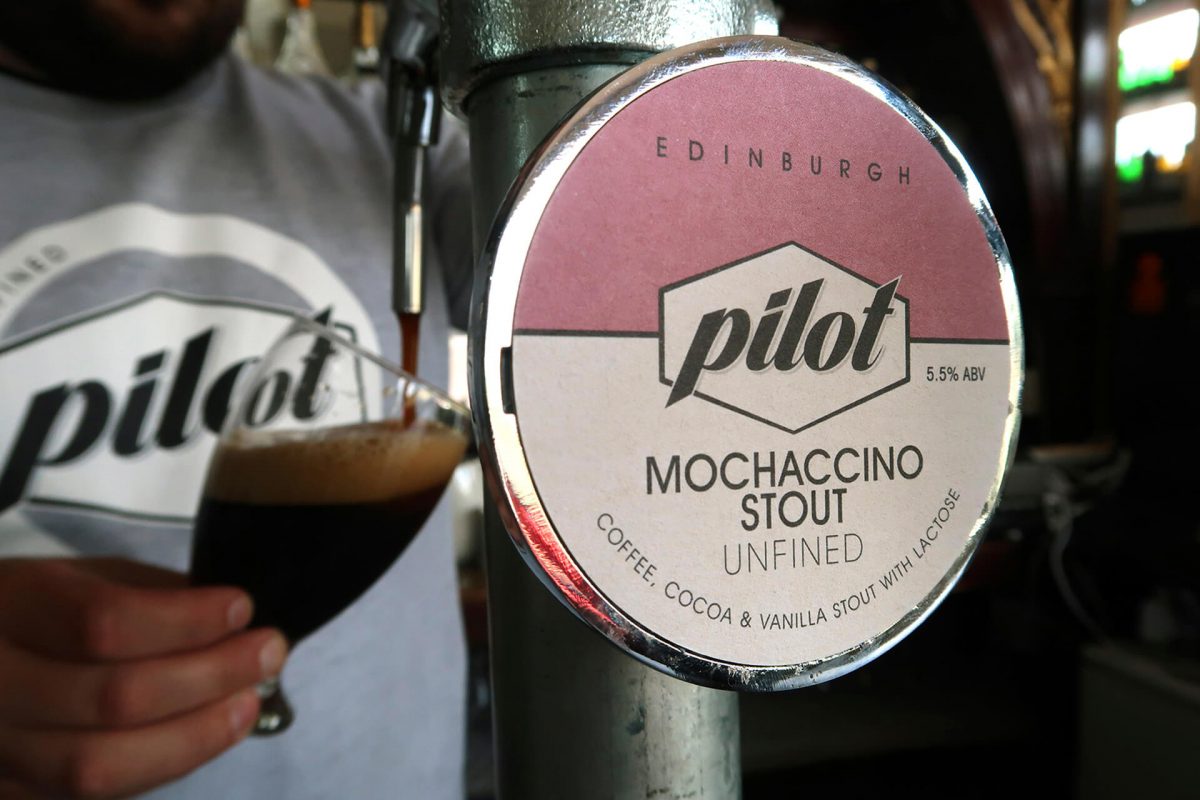 Then it’s on to the Pilot Brewery, just a 10 minute walk away, to try their lovely unfined and unfiltered brews – Iced Tea Pale Ale anyone? Just perfect for a sunny summer afternoon. 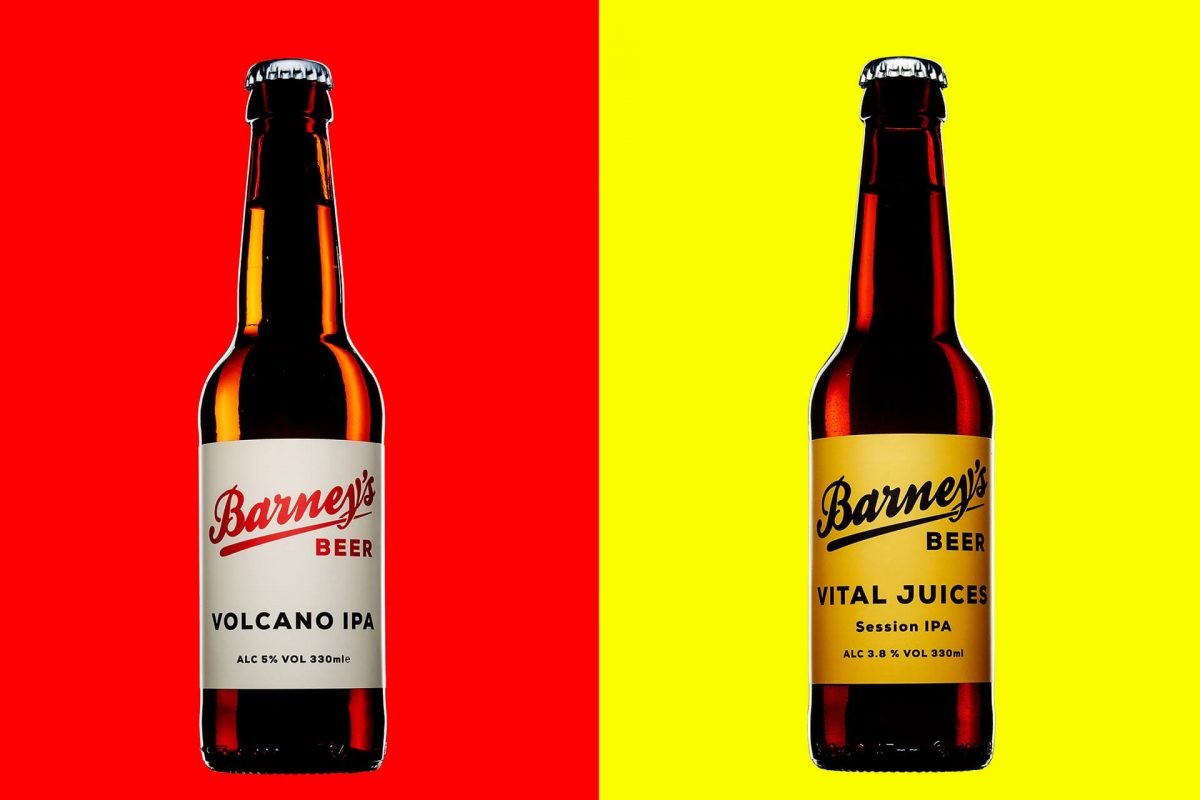 Our next stop involves a taxi ride from Leith to Barney’s Beer at Summerhall – a lively cultural village (containing the Royal Dick Bar and Pickering’s Gin Distillery) in the heart of the city.

From here it’s a 15 minute walk to BrewDog in the Cowgate, followed by a short walk back to Waverley Station to catch a train to East Lothian. 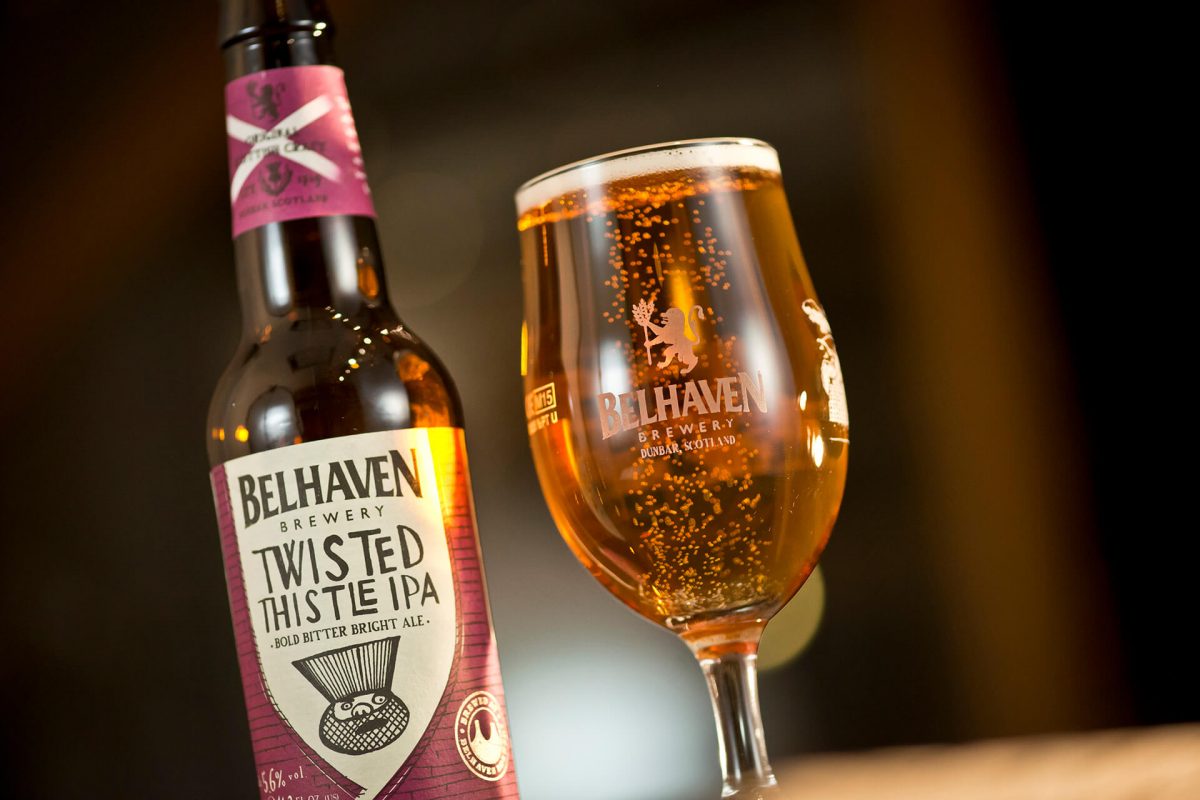 Heading for East Lothian, take the train to Dunbar for a tour of Belhaven Brewery, which is 20 minutes from the station and not far from Belhaven Bay. Belhaven is Scotland’s oldest working brewery and celebrates its 300th anniversary this year.

Once one of the world’s largest exporters of beer and the first to introduce keg beer, bottles and cans to Britain, Glasgow also has long connections with brewing. The Wellpark Brewery was founded in 1740 by Hugh and Robert Tennent and lager has been produced here since 1885. Tennent’s is clearly an important brewery, but there’s a lot more to discover across the city. 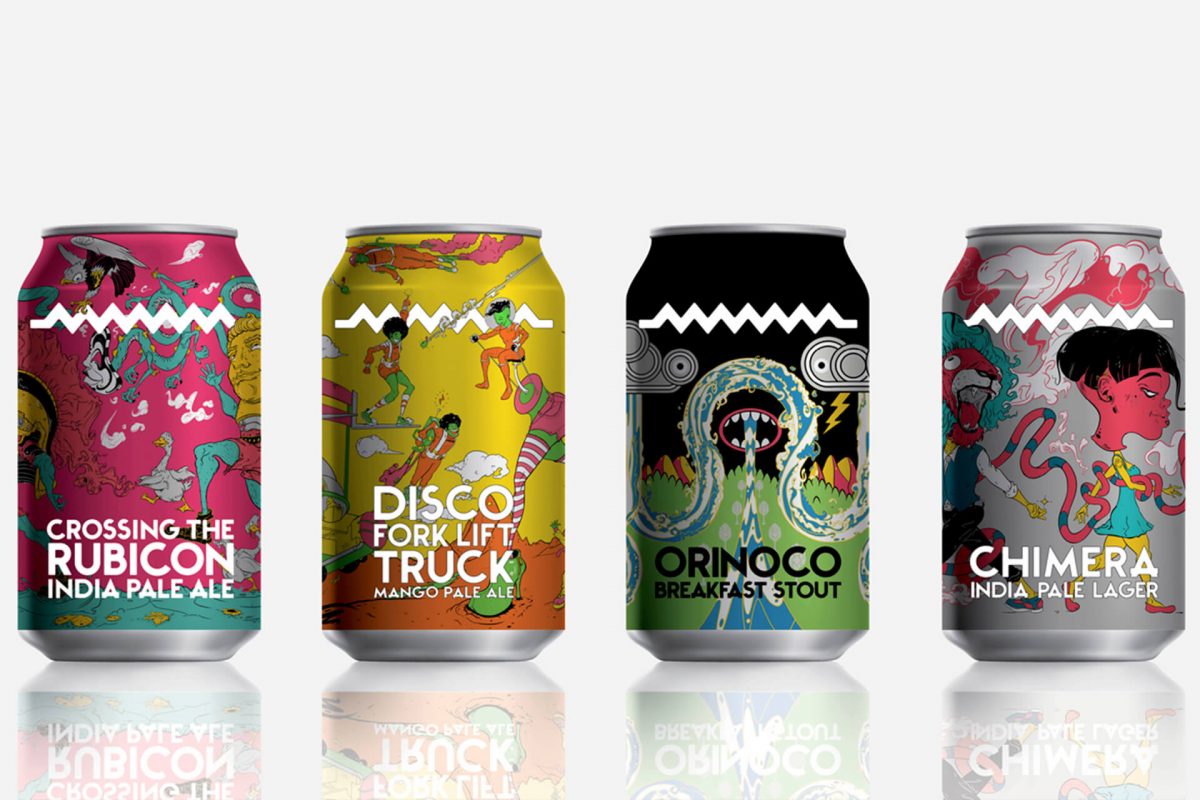 Taking its moniker from the original name for Wellpark Brewery, Drygate Brewing Co. is a joint venture between C & C Group and Williams Bros Brewing Co. and is just 15 minutes on foot from the Doghouse. You’ll find their brewery, brewhouse bar and kitchen and beer hall in a converted factory and they offer tours and brew your own experiences.

Wellpark Brewery, the home of Tennent Caledonian is very close to Drygate and is one of Europe’s most popular beer themed visitor attractions. 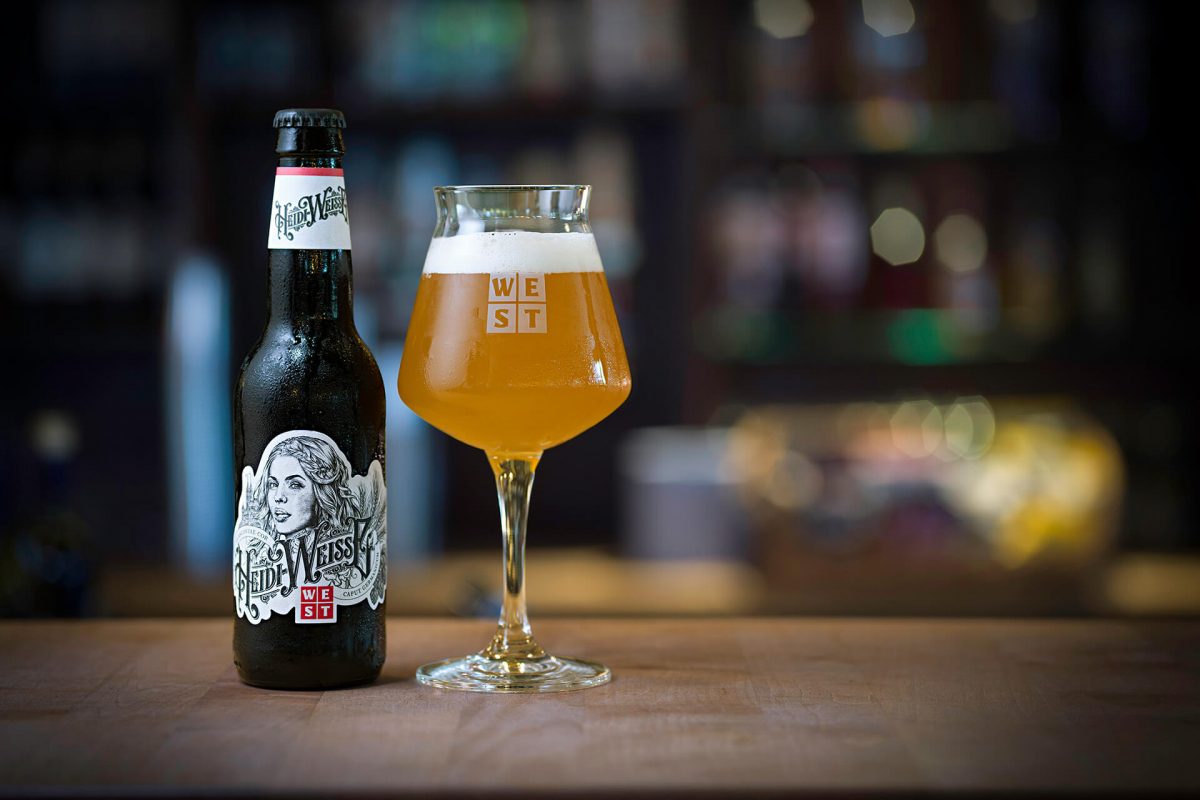 Beers with a ‘Glaswegian heart and a German head’ © WEST Brewery

From Wellpark, WEST Brewery is a short walk away and their beers are produced according to strict German Purity Law. Founder Petra Wetzel and her team produce German-style Scottish beers in the brewery, which alongside WEST On The Green bar & restaurant, is in the Templeton Building near the People’s Palace.

From WEST, it’s off to the West End. Take the subway from Bridgeton Station to Partick. The six°north bar is just a five minute walk away on Dumbarton Road and won Best Beer Bar in the 2018 Scottish Beer Awards.

A 20 minute walk, then takes you to BrewDog in Kelvingrove – another great venue where tasty beer, delicious food and regular live music keep customers well entertained.

Charming Ashton Lane, just 10 minutes away, with its cobbles underfoot and fairy lights overhead, is full of popular bars and restaurants including the Innis & Gunn Beer Kitchen, where beer features in many dishes and there’s always fresh beer on tap!

Then we’re Inn Deep! Situated on the banks of the River Kelvin, this venue is owned by Williams Bros Brewing Co. who produce fine ales including Fraoch, Alba, Seven Giraffes. They are passionate about producing ‘craft beer, not crap beer’ and ‘dugs’ (dogs) are very welcome!

Award-winning ScotBeer run fun, highly rated and recommended beer and brewery tours in Edinburgh and Glasgow, which include some of the above-listed venues.

Dundee is better known for its marmalade and cake rather than beer. The last few years however, have seen three new breweries and some fine brewpubs open in the city, so things are bubbling up. Further north, six°north, Fierce Beer and BrewDog especially, are making their mark in Aberdeen, Aberdeenshire and beyond.

This trail starts at Dynamo Dundee, part of the six°north family, which is just across the road from Dundee Station and V&A Dundee. The bar features 24 taps of the best beers from Scotland, the UK and beyond.

Then it’s just a short walk from Dynamo to BrewDog Dundee, where you’ll find 18 taps pouring fresh beer from BrewDog and other carefully curated guest breweries.

Next is Innis & Gunn’s Beer Kitchen just a 10 minute walk from BrewDog. The taproom here offers over 50 craft beers, tank fresh lager and you can also make your own and take a 5 litre mini keg of it home with you! 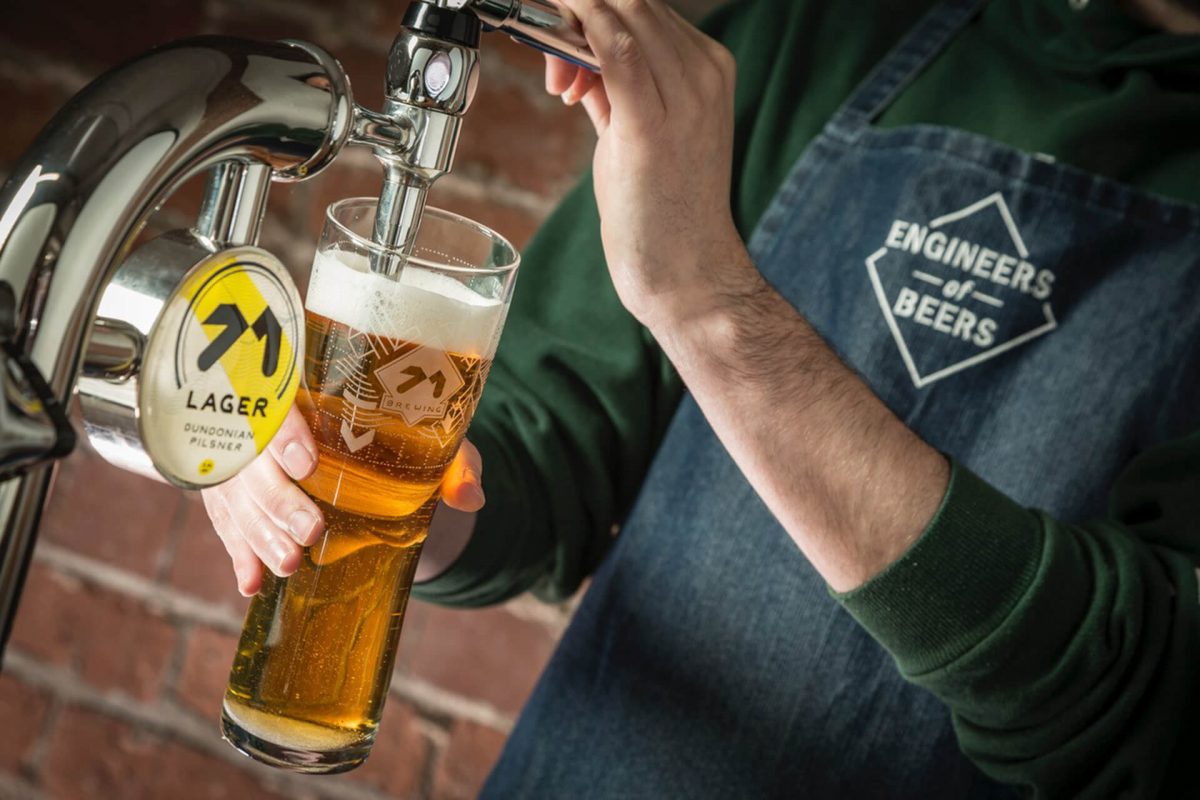 Finally in Dundee, take a 15 minute walk from Innis & Gunn to Bellfield Street for a tour of 71 Brewing. Housed in a former engineering works, the team here were the first to bring brewing back to the city in 50 years. There’s also a taproom and bottle shop on site.

Continue this trail and take the train to Stonehaven. Head for The Marine Hotel, overlooking the town’s lovely harbour. Here you’ll find another six°north bar serving Belgian-influenced Scottish beers. six°north are also well-known for delicious collaborations with other brewers. 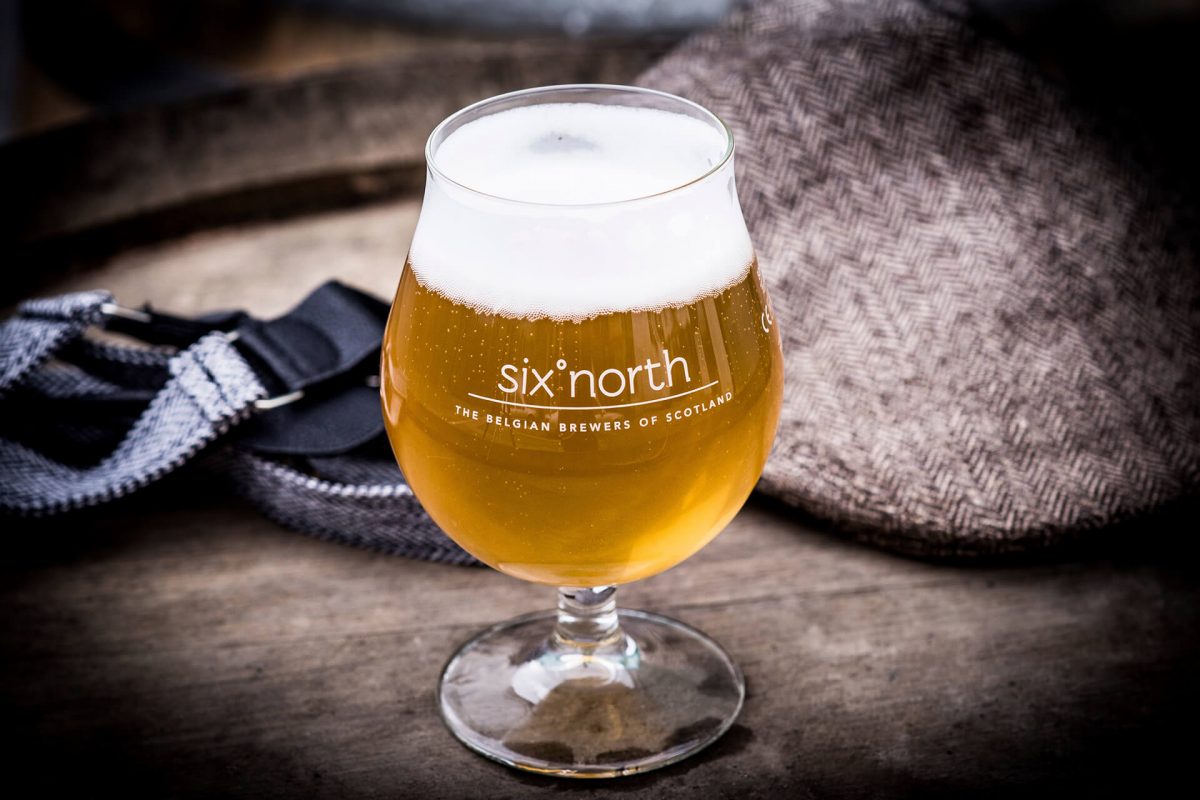 If your train goes through Laurencekirk, stop off at the Burnside Brewery where they sell their beers from an on-site shop each Saturday. Whilst they don’t offer tours, visitors are very welcome for beer and chat. The six°north brewery is just a little further up the road, though not open to visitors.

From Stonehaven, we’re off to Aberdeen, where you have a choice of BrewDog outlets to choose from! The nearest is just a few minutes from the station in Union Square shopping centre, BrewDog Castlegate is just a five minute walk and BrewDog Gallowgate – their first bar, set up in 2010, is 10 minutes away, near Aberdeen University. 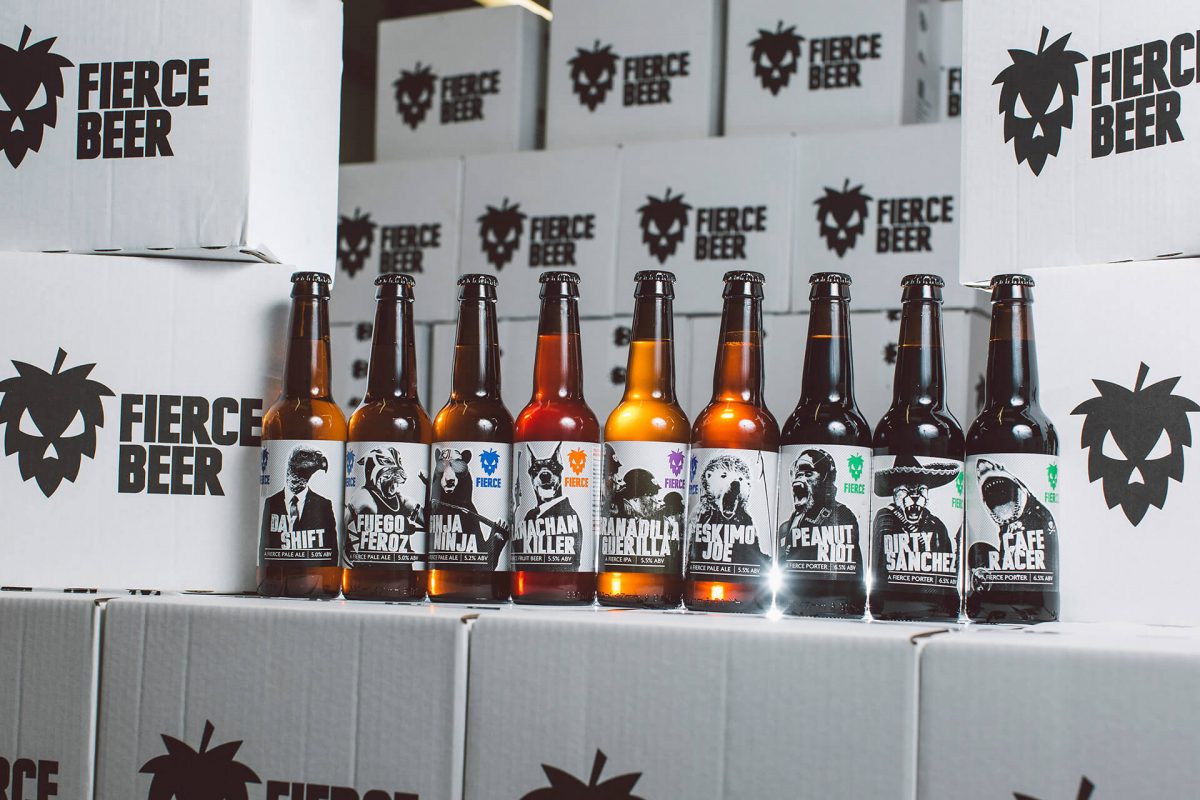 The Fierce Bar is just a minute from BrewDog Castlegate. Fierce is a young Aberdeen brewery, rooted in the city, though with global ambitions – they’re already exporting to 15 countries! They also have some great partnerships and beery experiments fermenting. The Fierce Brewery isn’t open to visitors, so the Fierce Bar is the next best thing.

To round off this trail, head for six°north’s bar, which is just a minute from BrewDog Gallowgate. 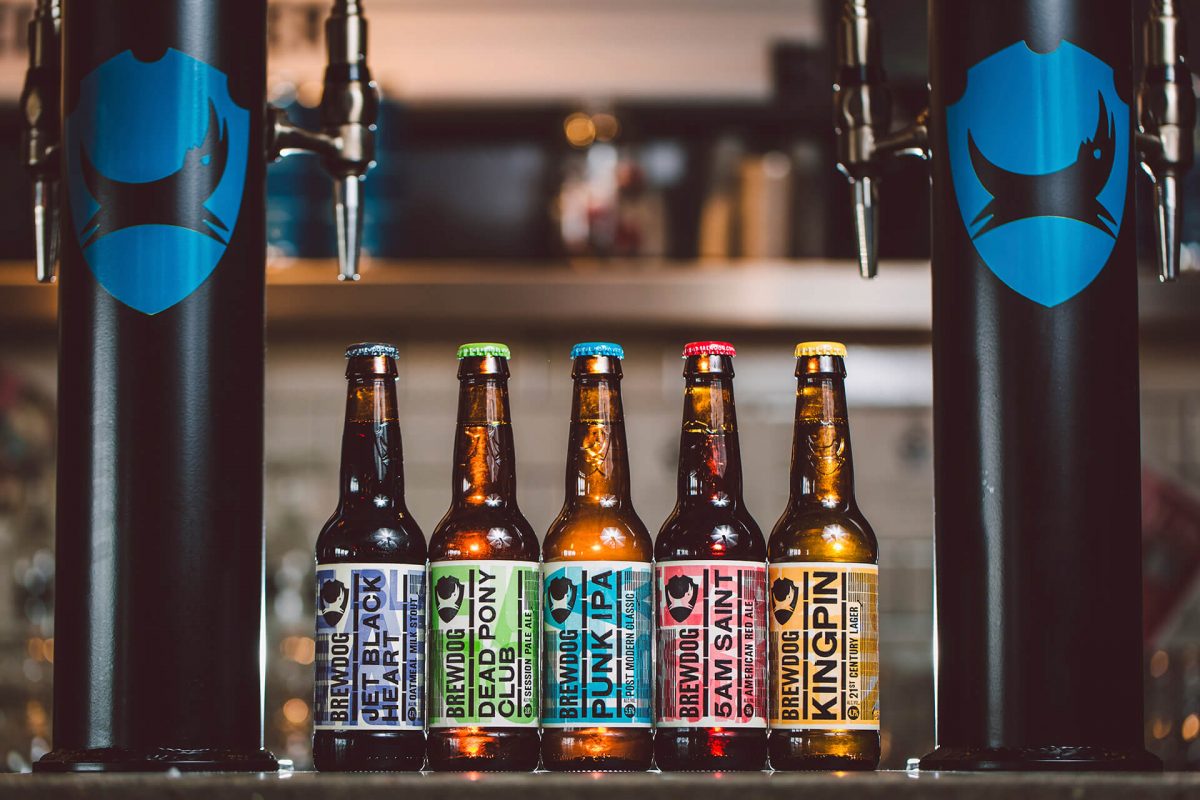 Just some of the brilliant beers produced by BrewDog © BrewDog

An optional extra involves a train trip from Aberdeen to Inverurie followed by a 30 minute taxi ride to Ellon and BrewDog’s global HQ. In their state-of-the-art eco-brewery, they offer DogWalk tours which include the original brewhouse, Site 3 brewhouse, Lone Wolf Distillery and a cheeky walk through their offices! Then unwind in the DogTap taproom.

These are just a few options to get you to some of Scotland’s breweries and brewpubs without a car. You could always have fun and use our Craft Beer Map to plan your own trail.